“#Pakistani man on trial for blasphemy shot dead in court” 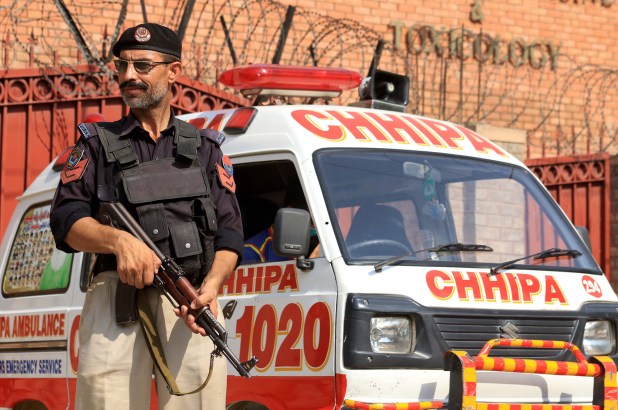 A Pakistani man who allegedly claimed he was a prophet was shot dead in a courtroom Wednesday while on trial for blasphemy – which is punishable by death in the country, according to reports.

Tahir Ahmad Naseem, whom a teenager accused of blasphemy in 2018, was seen in video slumped in his seat inside the court in the northern city of Peshawar, the BBC reported.

After being quickly caught, his attacker yelled that Naseem was an “enemy of Islam,” according to the news outlet.

Naseem had been a member of the Ahmedi sect, which is persecuted in Pakistan after being officially declared to be non-Muslims, the UK’s Guardian reported.

“I was sitting on my seat in the office around 11:30 when I heard the firing,” said attorney Saeed Zaher, who rushed to the scene of the attack and said the victim was apparently shot in the head, according to the news outlet.

“The killer was caught by the police and the body was lying on a bench within the courtroom,” he added. “A person entering with a pistol and murdering someone within a courtroom is very disturbing.”

Video circulating online appeared to show the accused killer sitting barefoot on a bench under guard, claiming he had been ordered in a dream to kill the blasphemy suspect.

The victim was first accused of blasphemy by Awais Malik, a religious school student, after Naseem had struck up an online conversation with him while he lived in the US, the BBC reported.

Malik told the BBC he later met Naseem in a Peshawar shopping mall to discuss his views on religion, after which he filed a complaint against him with authorities.

A spokesman for the Ahmadi sect suggested that Naseem was mentally ill and had uploaded videos to YouTube claiming to be a messiah.

Though blasphemy is legally punishable by death, no one has so far been executed for it by the state, the BBC reported.

However, at least 17 people convicted of blasphemy are on death row, while many others are serving life sentences for related offenses, according to the Guardian.

#Now Scream This: Stay Inside and Stream These 10 Horror Movies