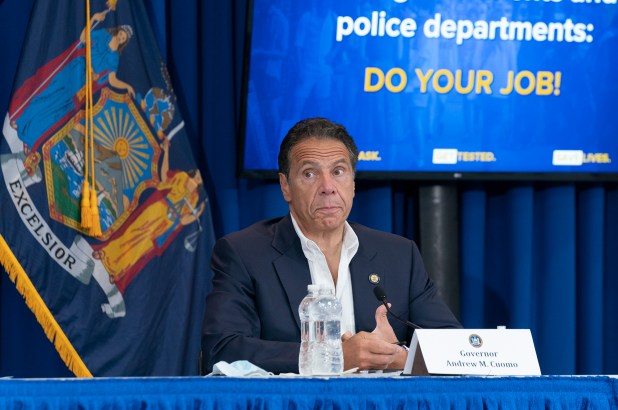 Senate minority leader Rob Ortt says Gov. Cuomo is correct that a tax hike on our state’s highest earners would be disastrous as New York is struggling to mount an economic recovery.
Lev Radin/Sipa USA

When it comes to New York’s economy and creating opportunity, there is much that Gov. Andrew Cuomo’s administration has gotten wrong. But in one area he is correct: A tax hike on our state’s highest earners would be disastrous for our state — especially when New York is struggling to a mount a recovery after the novel-coronavirus pandemic and the lockdowns.

The Empire State economy has lagged behind the rest of the nation for years. Now, due to the pandemic, we are facing quite possibly the most daunting long-term economic crisis of our lifetimes.

As we in the Senate Republican Conference look for constructive solutions, Senate and Assembly Democrats are under the misguided idea that they can tax our way out of this situation.

They are looking at a tax-hike scheme that ups the tax brackets for those who make over $1 million annually, implementing a tax on second residences in New York City and instituting a capital-gains tax. Even in times of prosperity and growth, this plan would be short-sighted. Advancing this agenda right now would doom our state’s economic outlook for years to come, not least by accelerating the outflow of the very taxpayers it relies upon the most to generate revenue.

To Albany Democrats, the solution to every problem is the same: tax the rich. Every budget short fall, pet project and pipe dream can be funded by simply raising taxes on individuals and businesses that make New York City the world’s financial capital, creating tens of thousands of jobs in the process.

But what happens when that gravy train leaves town?

New York’s high-income earners are responsible for paying 46 percent of the state’s overall income-tax revenue. Those tax dollars are critical to funding schools, public safety, infrastructure, necessary social programs and more in communities in every corner of our state.

But these individuals are also the most mobile in our community, and when they leave, they take a significant portion of state revenue with them. In fact, if just 3 percent of New York’s top 1 percent of income earners were to leave the state, they would take more than $500 million in tax revenue with them.

New York’s high-tax climate has long provided an incentive for these individuals to leave the state anyway. For many, the recent pandemic has made the New York exodus a temporary necessity, and now these new tax hike proposals could make those moves permanent.

Then, too, this misguided tax-hike push is unlikely to raise as much revenue as Albany Democrats imagine. A 2012 study by Stanford University’s Josh Rauh examined the effects of the millionaires tax that was enacted in 2012 in California. It found that between outward migration and behavioral responses by affected taxpayers in the Golden State who chose to stay in the state, nearly half of the revenue increase expected by 2013 had eroded.

These reckless proposals also threaten thousands of jobs in our state. Facing mandatory social-distancing orders, businesses have proved they can function with their employees working remotely.

Adding new taxes on our financial-services industry would provide additional incentive for these businesses to make those changes permanent and protect their employees from New York’s uniquely onerous tax burden. This would jeopardize the more than 30,000 jobs created by Wall Street alone, with countless more at risk.

Instead of dropping new taxes on New York’s financial engine, Albany Democrats should work with Republicans to make tough financial decisions, as we were elected to do. The high cost of living has already forced thousands of New Yorkers and hundreds of businesses out the door. Imposing new taxes during this current pandemic will crush our economic ­recovery, kill jobs and imperil services for our most vulnerable.

Rob Ortt is the Republican ­minority leader in the state Senate. Twitter: @SenatorOrtt