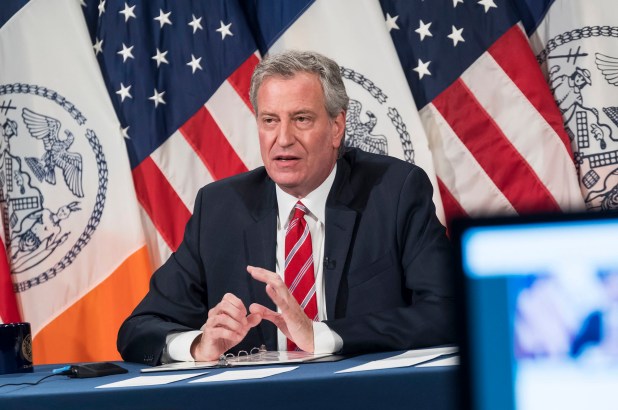 Mayor Bill de Blasio is threatening to pink-slip 22,000 city employees if the feds or state don’t bail him out.
Ed Reed/Mayoral Photography Office

Mayor Bill de Blasio is threatening to pink-slip 22,000 city employees if the feds or state don’t send him cash soon, but the schnook can’t even blackmail properly.

De Blasio trotted out the L-word, layoffs, to stoke fear of a catastrophe. Yet even after letting that many workers go, the city headcount would still be higher, by nearly 7,000, than when Hizzoner took office in 2014.

The growth came with no noticeable improvement in services, so why expect layoffs to make them worse? Some might see a trimming as a necessary step, aid or not. So much for his threat.

Yes, layoffs are painful (especially if you’re getting the ax). But de Blasio spent years recklessly bloating the workforce when the economy was strong and revenue flush; that left the city at risk during the inevitable downturn.

Indeed, despite the pandemic, his April budget called for an even larger workforce by 2022. If he imposes layoffs now, he’d deserve the blame — not DC.

Budget watchdogs, for starters, note 22,000 layoffs would save far more than $1 billion. The Citizens Budget Commission says losing 9,000 jobs over two years via a real job freeze alone could do the trick.

“Better to work with labor to increase productivity, reduce the workforce through attrition” and have workers chip in for health benefits, says CBC prez Andrew Rein.

#Tom Brady’s coronavirus message: ‘Only thing we have to fear is fear itself’

#Giants plan to use versatile Jabrill Peppers everywhere they can