“She wanted to know how they could help,” says Walsh.

BMC serves a proportionately higher number of uninsured and otherwise vulnerable individuals. As a result, BMC depends heavily on the goodwill of others and the generosity of donors.

Like many hospitals all over the country, BMC’s COVID-19 efforts are centered around saving the lives of coronavirus patients who need to be hospitalized, and sending those who test positive but are well enough to recover at home to get better and self-isolate. But “that’s a problem when you have no home to go to,” says Walsh.

Keeping those individuals in the hospital was not a choice — they needed the beds for patients who were extremely ill. But sending those that are housing insecure and suffering from COVID-19 out into the streets seemed cruel, irresponsible and could lead to bigger problems.

Thanks to funding from John Hancock and others working with the Boston Resiliency Fund, BMC was able to open a COVID Recuperation Unit. At one point it housed as many as 300 and, as of this writing, around 1,000 have been discharged from the facility.

But that’s not all. Boston-based John Hancock is the primary sponsor of the Boston Marathon which was due to be held on April 20. The event not only shuts down the city for that day (most workers get the day off) but it also celebrates athletes and raises money for organizations in need, many of which are Boston hospitals.

The marathon had to be cancelled, but, the Boston Athletic Association (BAA) and John Hancock found a way to make something good of it by donating 124 Boston Marathon invitational entry bibs to organizations helping COVID-19 patients.

These bibs, mind you, are great fundraising vehicles; consider that Massachusetts General Hospital used them to create an Emergency Response Marathon Team after the 2013 Boston Marathon Bombing. The hospital has raised $2.3 million as a result. Dr. David Brown, head of Emergency Medicine at Mass General says that the hospital will receive 15 additional bibs for the September Marathon. Money raised will be used to fund training, conduct drills and to scale up treatment when surges occur.

But it’s not only hospital executives who are excited by John Hancock’s generosity. Many of the city’s residents can recite the slogan the company crafted to show its gratitude to COVID-19 frontline workers. “You are essential. We are grateful.” Those words can be seen on doors and windows all over Boston; John Hancock made templates of the sign that kids could print and color available on their Web site.

A highly visible expression of gratitude currently lights the skies of Boston. On April 6 John Hancock ignited its historic weather beacon blue — the color of healthcare — and committed to leaving it that way until the Stay at Home order was lifted. “Not long after we lit it, others followed,” says Barbara Goose, John Hancock’s chief marketing officer. “We’re expressing our gratitude and encouraging each other,” says Goose.

Still, there was something more that John Hancock felt it could do. They purchased 8,500 meals which were distributed over a period of six days to feed employees at Beth Israel Deaconess Medical Center, Boston Medical Center, Brigham and Women’s Hospital, Massachusetts General Hospital and Tufts Medical Center. These were not just any meals, according to Goose they were procured and delivered through Off Their Plate which partners with some of the city’s finest restaurants to get meals.

“We were grateful to get such fine food,” says Walsh. Not only healthcare workers benefited from this donation — restaurant workers who might have otherwise been laid off became able to earn a paycheck at a time when dining establishments are takeout only or closed.

Altruistic giving is not the only thing John Hancock cares about. Its customers and employees rate just as highly. These individuals are sheltering in place, trying to learn how to be productive at home, communicating in new ways, getting their questions answered and more.

“We went digital almost overnight,” says Goose, which in some case, required quickly training workers so that customers could be serviced in the usual way, with the addition of one thing: “We trained our call center employees to be even more empathetic,” she says.

Caring for employees at John Hancock isn’t an afterthought. At a time like this they have questions, cares, and worries. The company has redoubled its commitment to be fully transparent by offering three communications from executives each week, including a live “Ask me anything” with the CEOs of John Hancock and Manulife, its parent firm.

John Hancock has created and provided its employees with access to 60 second videos covering topics such as using your (former) commuting time well, juggling work and caregiving, focusing, coping and more. “It’s been really good to hear from our leaders this often,” says Matt Gibson, head of vitality sales and distribution.

Support for employee groups is high. The Global Women’s Alliance offers lunch time meditations during quarantine. Another group looks for alternative ways to celebrate PRIDE in light of its cancellation in nearly every city in the US.

“One of John Hancock’s values is to ‘share your humanity,’” says Gibson, explaining that during COVID-19, “we’ve really done that.” He points out that he and his co-workers have literally been invited into each other’s homes via Skype and through conversations that illustrate what their childcare and elder care commitments look like.

“We’ve learned that we all need to be flexible,” he says. “In a way, we’ve all become closer.”

#'Batwoman' Is Replacing, Not Recasting, Lead Character in Season 2 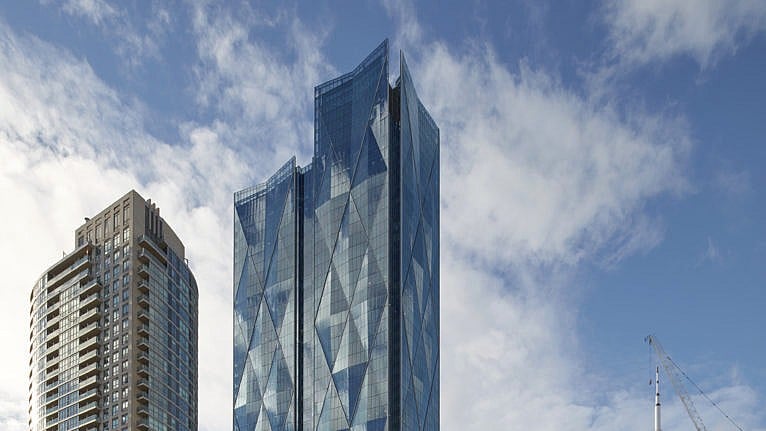 #This landmark skyscraper was redesigned for the future

#Bari Weiss on why she left the New York Times