The idea for a portable extractor hood came to designer Maxime Augay after his own experiments with cooking and using the standard hood right above his countertop. “It works well, but is very difficult to keep clean”, Maxime mentioned, as he tinkered with the idea of a smaller, portable hood that could easily fit in tinier kitchens… and more importantly, in kitchens without existing hoods. When you cook anything with oil or fat in it (that’s basically every food ever), you release fumes caused by burning, and small particles of grease along with it. The job of the hood is to channel those greasy fumes out of your kitchen – the challenge, however, is cleaning the hood every couple of months. Even worse, some kitchens don’t come equipped with hoods, which leads to two main problems – you’re left with spatters of grease around the walls and on the underside of cabinets, but more importantly, try grilling or searing something and you risk setting off the smoke alarm. Determined to find a solution that ticked all boxes, Maxime designed a compact countertop fan that was powerful enough to suck and filter out the fumes coming off the stovetop, while being quieter than your average exhaust fan. 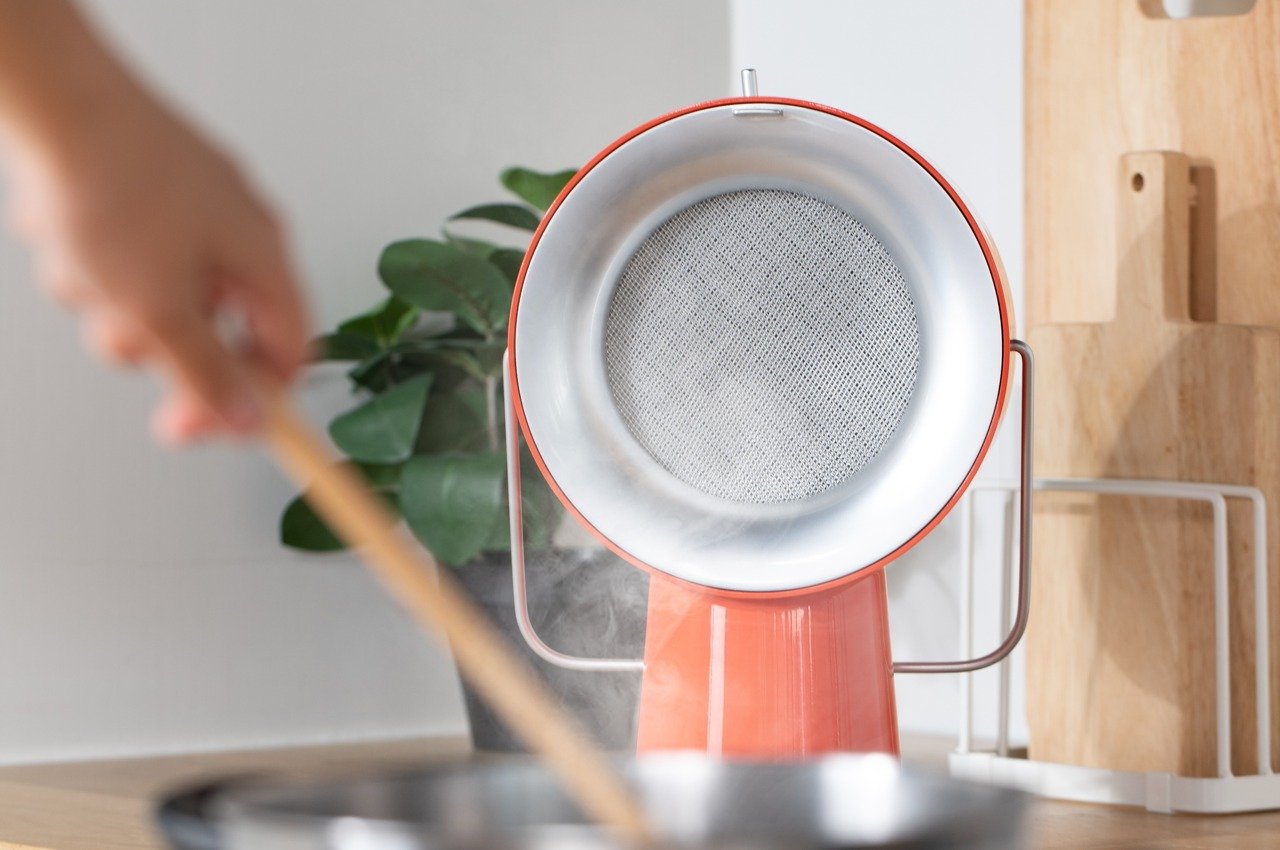 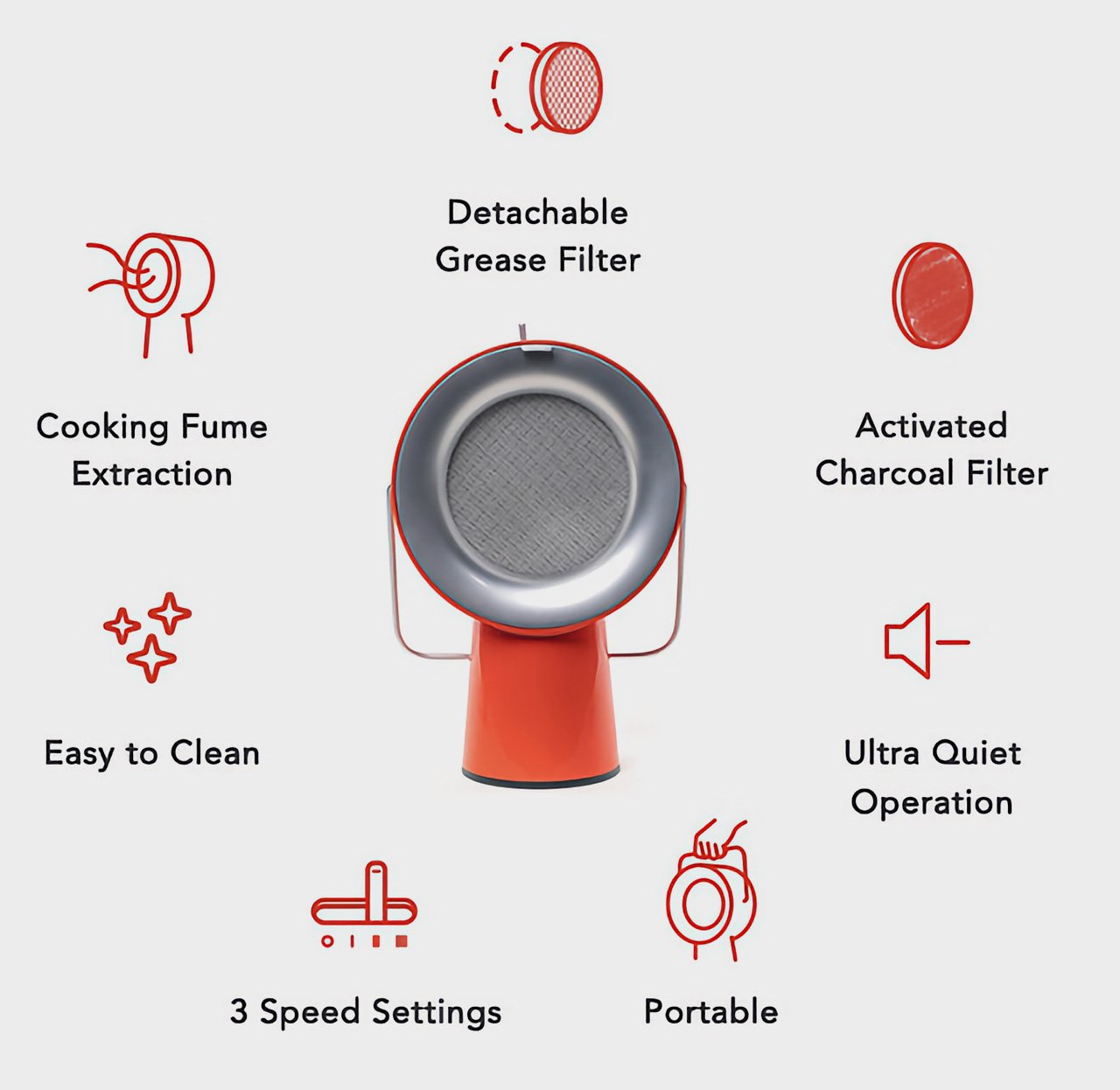 Styled almost like a Dyson Bladeless Fan, the AirHood is a portable hood that sits on your countertop, sucking in the fumes from your stove, induction cooker, or even your grill. Available in both wireless and wired formats, the AirHood works partly like a chimney, and partly like an air purifier. A switch on the top lets you choose between three fan speeds, depending on what you’re cooking, and the AirHood even comes with an optional Base Boost – a platform that elevates your hood by a comfortable two inches. Once switched on, the AirHood pulls fumes into its inlet, where the air first passes through an oil filter that traps the grease, and then an activated carbon filter that purifies the air of any toxins. Clean air then makes its way out of the outlet at the back of the device, keeping your kitchen air clean and eliminating the risk of accidentally triggering your smoke alarm. When not in use, the AirHood serves as kitchen decor, thanks to its minimalist, sculptural appeal. You can either leave it on your countertop or hang it on a wall, thanks to a hook built into the AirHood’s handle. 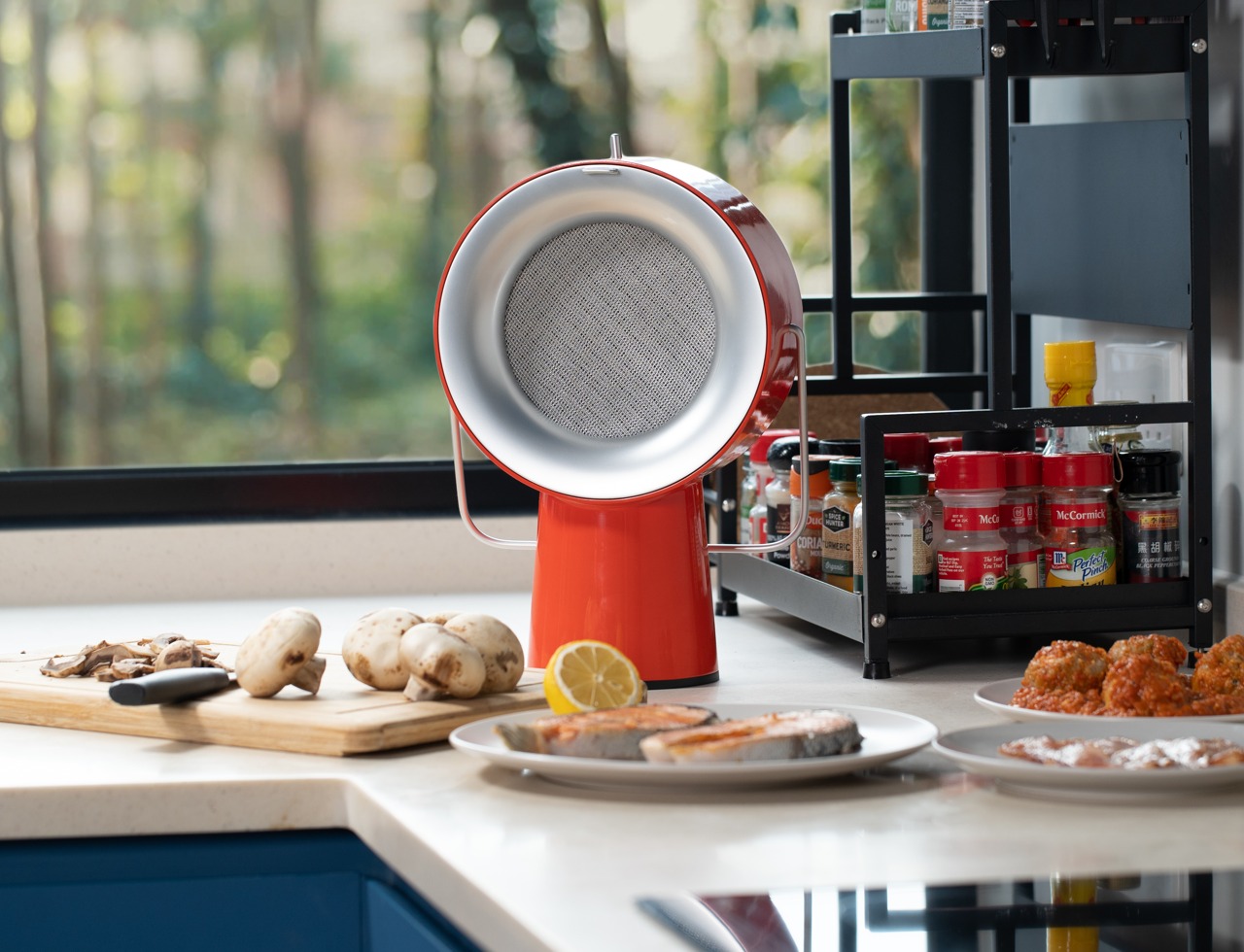 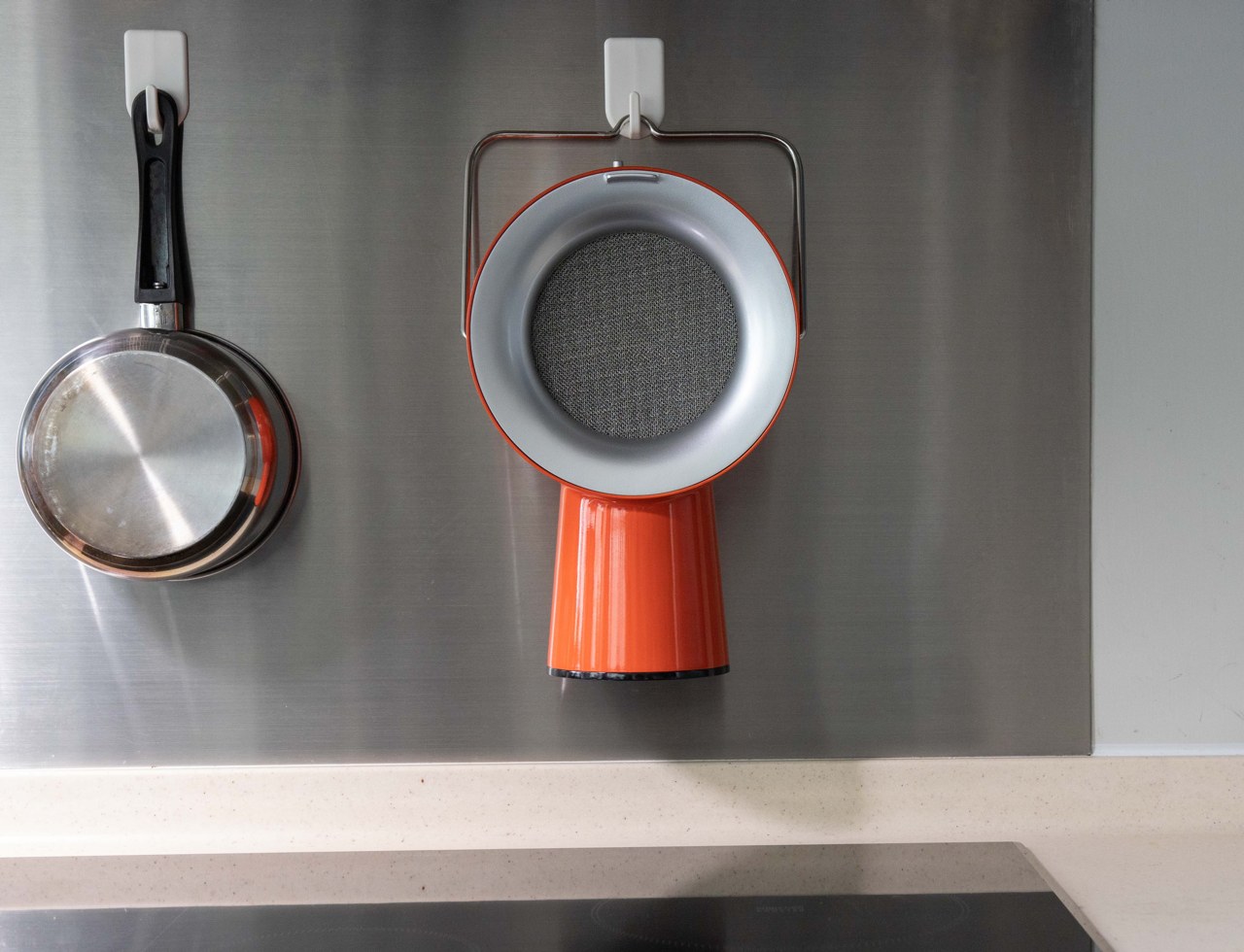 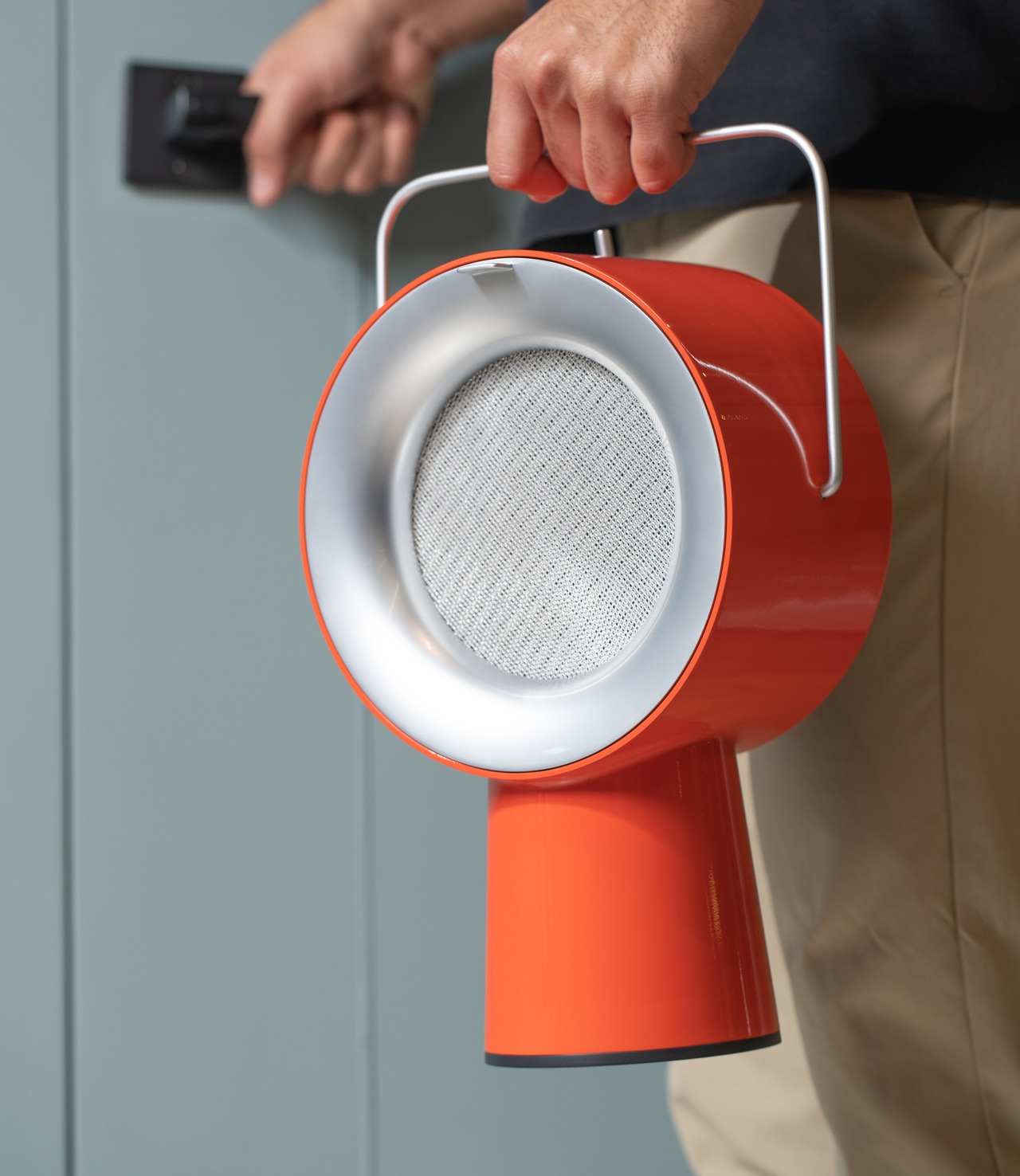 Aside from being portable, the AirHood is easy to clean too. Its simple surfacing and polished plastic construction allow you to clean your AirHood with just a damp cloth. Besides, the internal filters are replaceable too, giving you a hood that lasts as long as your cooking escapades do. Ultimately, Maxime’s design solution aims at tackling a challenge that’s common yet unaddressed. A vast number of kitchens don’t come equipped with chimneys/hoods – especially if you’re using an induction cooktop that can be plugged in anywhere. 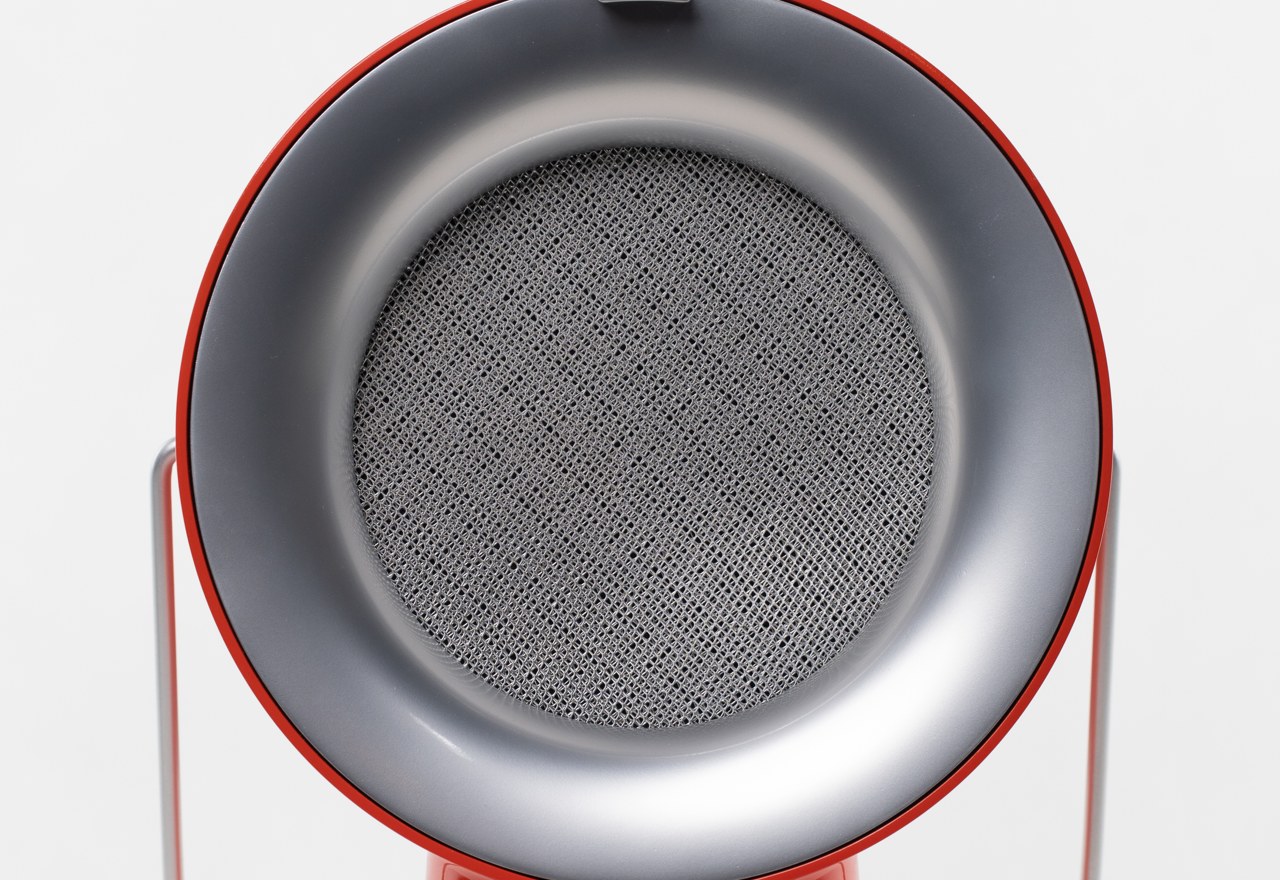 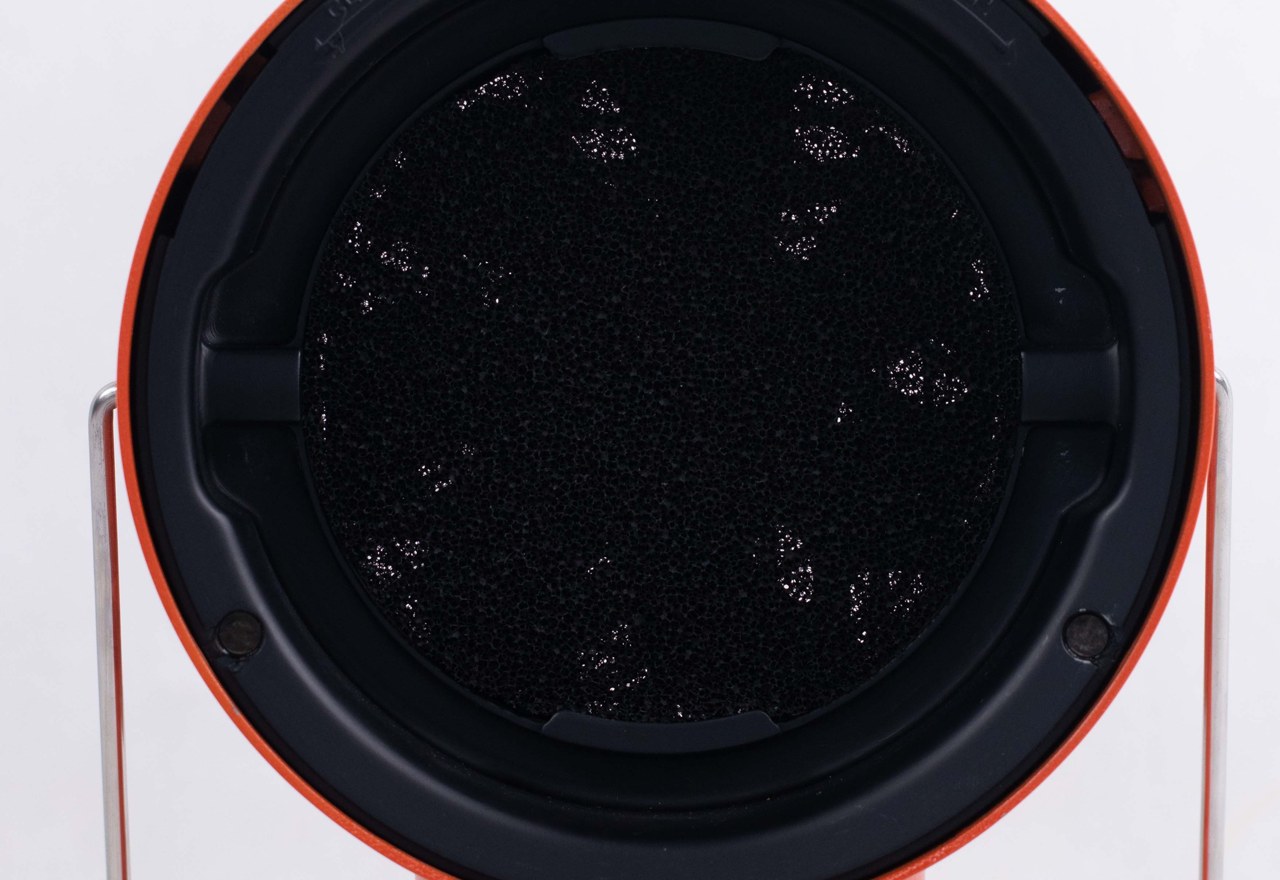 The charcoal filter purifies the air.

While Maxime does raise the concern about toxic fumes from your food polluting indoor air, a more pressing concern is the grease, that eventually forms a thin, sticky film on your cabinets, ceiling, and other surfaces of your kitchen. The AirHood helps address that problem along with the constant fear of having your smoke alarm getting triggered every time you try to cook bacon or stir fry some veggies. Moreover (and this is highly understated), since it sits beside your stove instead of above it, it doesn’t obstruct your view and even allows you to capture overhead cooking videos Buzzfeed-style. Besides, I wouldn’t mind having the AirHood in the frame too, given how peppy it looks!

The AirHood comes in 3 colors (red, black, or white) and you can grab your own for an early bird price of $89 using the link below! #Why Your Smart TV Needs a Streaming Stick – Review Geek