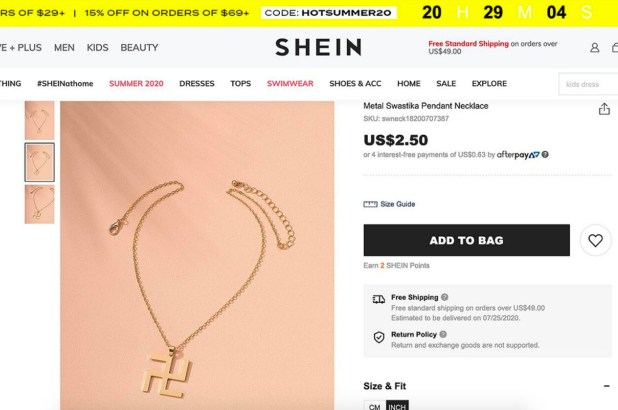 Fast-fashion retailer SHEIN is under fire yet again for selling an insensitive piece of jewelry.

On Thursday, screenshots from the retailer’s website surfaced on Twitter, showing a “metal pendant necklace” that appears to be a swastika, a Nazi hate symbol, for sale on their site.

After outroar online, it seems the necklace has been removed.

Last week, SHEIN had to apologize for selling “frilled Greek carpets” that many online believed were Muslim prayer rugs. The rugs featured a design that looked like Kaaba, the center of the most important mosque in the religion.

The brand apologized in a statement. “We made a serious mistake recently by selling prayer mats as decorative rugs on our site. We understand that this was a highly-offensive oversight and we are truly sorry,” they posted on their Instagram only four days ago.

However, SHEIN has yet to acknowledge the offensive $2.50 necklace.

The uproar started after watchdog account @hereforthetea2 noticed the necklace and posted about it on Instagram to their 110,000 followers.

“This isn’t what we call a ‘metal pendant necklace,’ @SHEIN_official. Take this down. Now,” one Twitter user wrote, with a screenshot of the adornment.

Influencer Nabela Noor, who runs her own clothing line Zeba, asked her many followers to call SHEIN out for their “sheer ignorance and blatant disrespect towards other cultures and religions.”

In addition to her anger about the necklace and the mats, Noor was also angry at SHEIN’s decision to sell “South Asian style clothing modeled by white women and rebranded and renamed to erase its cultural significance.”

Though she had spoken with the company’s Head of Brand and felt as though they were moving in a positive direction, “Seeing this today makes me feel sick to my stomach and question the authenticity of SheIn’s apology,” she wrote on Instagram.

“in case u needed another reason to boycott shein: they are selling f–king SWASTIKA NECKLACES. this is ACTIVELY THREATENING to the jewish community,” wrote one Twitter user.

Some screenshots posted online show that the necklace would come up when the term “swastika” was searched, and the term was possibly in the item’s name, though this differs from photo to photo.

Influencer Marissa Casey Grossman, who posts under the handle @fashionambitionist on Instagram, pledged to never shop from the brand again. “I have zero words. I will NEVER be buying from @sheinofficial @shein_us EVER again. This is a company that I’ve bought from so much over the years and to see this is ABSOLUTELY disgusting,” she posted.

#Rudy Giuliani Called the Cops on Sacha Baron Cohen, So What Happened?

#Rikers Island inmate goes on Facebook live from inside jail 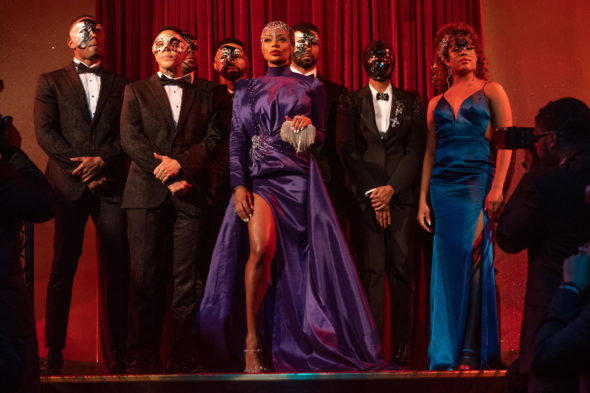 #Video shows officer point gun at doctor on his own property