“#Quibi Almost Had an Even Worse Name Than “Quibi””

One of the worst things about Quibi is its name. The mobile streaming platform was already fighting an uphill battle just in explaining the concept of its app to prospective users, but then it went and threw a nonsensical fake word – short for “quick bites” – into the mix on top of that.

But it turns out that “Quibi” wasn’t the first choice for the name of the app. The initial choice was much, much worse.

Before Quibi settled on the dumb-as-hell “Quibi” for its name, the company’s working title was NewTV. That’s pretty stupid too, but at least it’s not as bad as what co-founder Jeffrey Katzenberg originally wanted to name it. Thankfully, CEO Meg Whitman was there to stop his worst impulse. According to The Wall Street Journal:

The executives wanted a name that captured the company’s strategy. Mr. Katzenberg was initially partial to “Omakase,” a term used to describe high-quality sushi selected by the chef. Ms. Whitman wasn’t in favor. The two agreed to set it aside. The company hired a brand-strategy firm, Siegel Gale, which helped come up with the name Quibi— short for “quick bites.”

We thought Quibi was bad? We don’t know how good we have it here in Quibi world. Can you imagine if the service was named Omakase? The cultural appropriation conversations alone seem like an obvious red flag, but Katzenberg evidently didn’t think that would be a problem. And while coastal residents of the United States might be familiar with sushi terms, I imagine a massive majority of citizens has never heard that word before, so the finer points of its meaning would be lost on them anyway.

In a non-pandemic world, I can see how Quibi might have looked good on paper. Short bursts of content created by some of the biggest names in the entertainment industry, perfect for consumption while riding a subway or waiting in line on your lunch break? Sure, why not. Instead, a combination of the coronavirus, Quibi’s lackluster programming, and probably a dozen other factors has resulted in the app not performing nearly as well as anticipated – and that’s putting it mildly. The company raised $1.75 billion from investors, but by October, one billion of that is estimated to be spent already. The WSJ piece suggests that $200 million more in funding will need to be acquired for the app to continue operating…and when people smell failure in the entertainment world, it’s rare for backers to enthusiastically jump on board. Quibi might end up surviving, but it sure seems to be in more trouble than we thought. 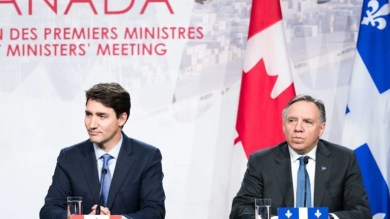 #Quebec puts the heat back on Trudeau

# Buy the dip in gold but not stocks, say Citi’s global strategists

Watch ‘Pearl’ Review: Anthony LaPaglia and Larsen Thompson Are Well-Matched in an Uneven but Affecting Drama