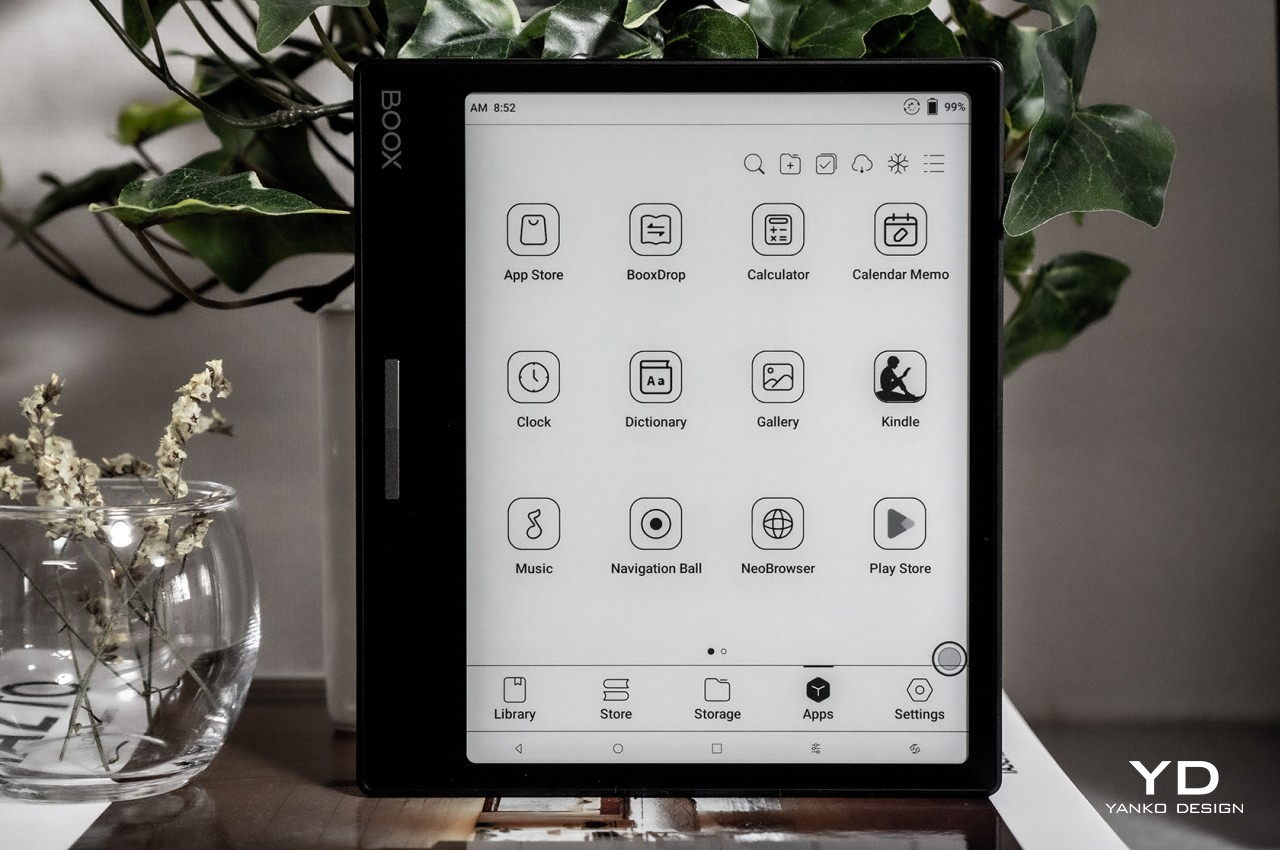 The Onyx BOOX Leaf 2 offers a powerful, no-nonsense eReading experience wrapped in an elegant and ergonomic package with an accessible price tag.

Our smartphones are veritable gateways to wonderful new worlds, and tablets are their larger cousins that can expand your view, literally. The powerful features they provide and the colorful screens they offer rich experiences that fit perfectly with modern lifestyles. They come with a steep price, however, both literally and figuratively, especially when it comes to comfort and eye health. When you’re reading a lot of things, like books or even websites, a smartphone or even a tablet might actually be the worst device for you. Fortunately, eBook readers have been around for quite a while now, offering a much-needed reprieve and a better experience that now come in a variety of shapes and sizes. The Onyx BOOX Leaf 2 is one of the latest to join that growing army, and we give it a thorough test to see if going back to basics spells its victory or its doom.

Ever since the first generations of eReaders came about via Amazon’s Kindle brand, expectations of these devices in terms of aesthetics have been pretty low. They’re generally small slabs of black plastic that are handy, portable, and utterly uninspiring, designed to let you enjoy content without distractions or getting in the way. While the objective might have been good, it makes the presumption that book lovers don’t actually pay attention to the appearances of their reading materials, which is quite the opposite when you consider how much attention they pay to book covers. 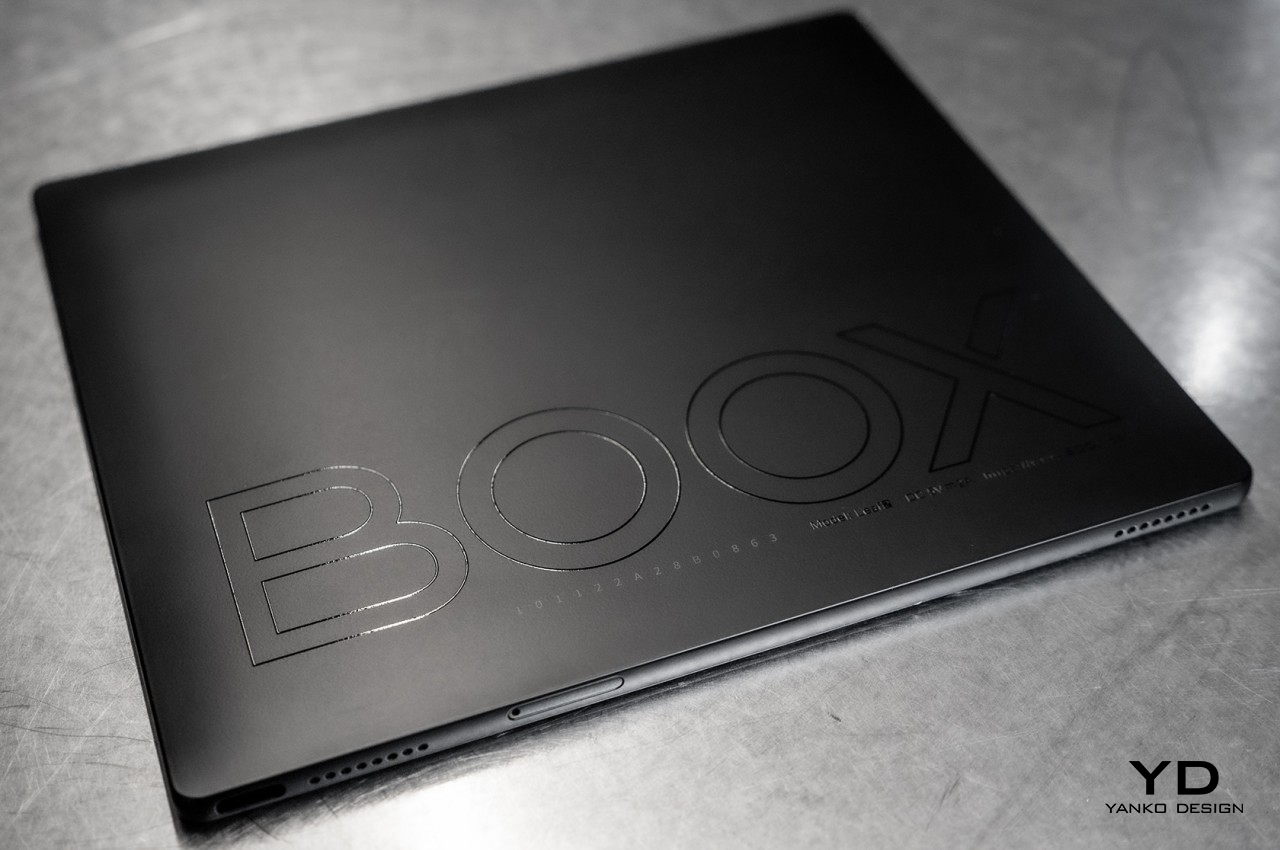 Fortunately, the Onyx BOOX Leaf 2 has learned from the lessons of the past and arrives as quite a fine-looking piece of hardware. Yes, it’s still made of plastic, which has both advantages and disadvantages, and it’s a smudgy piece of plastic at that. You might find yourself obsessively wiping its back very often just to maintain its pristine appearance. It doesn’t have anything in the way of decorative elements, and the only parts that literally stick out are the power button and page turn buttons. It clearly embraces minimalism’s best aspects.

It also applies a design language that’s now common to phones and tablets, meaning it is largely flat on all sides, save for round corners. The edges are plain and clean, broken only by holes for the speakers, the microphones, the microSD card slot, and the USB-C port. The back is also completely flat, unlike the tendency of most eReaders to bulge a bit. Fortunately, it doesn’t affect comfort and usability at all.

The BOOX Leaf 2 comes in two colors that differ in minor yet significant ways. The black review unit that we have has the E INK screen completely flush with the frame, protected by a layer of glass. This makes it trivial to wipe off dirt or anything else that accidentally drops on the display. The white variant, on the other hand, has the E INK panel completely exposed but sunken into the body of the device. Its advantage is that there is no glare or reflection from a glass layer that could get in the way of your reading.

Despite their basic and almost crude looks, eReaders have always been designed to be easy to carry and hold in one hand to make reading for hours on end a comfortable experience. That has remained true save for larger devices, and the BOOX Leaf 2 is gladly no different. With only a 15g difference in weight (the black model is heavier because of the glass), both variants are light and small enough to carry in a large pocket. Given how some of Onyx’s devices have been growing in size lately, it’s definitely a nice break and a return to roots.

What makes the BOOX Leaf 2 even more ergonomic is that one of the edges extends a bit, forming an area that your hand can conveniently hold without accidentally touching the screen. Even better, there is a rocker button that you can press to turn pages, saving you from having to lift your other hand to touch or swipe at the screen. Admittedly, the lack of demarcation between the two halves of that button could be a bit disorienting but it is definitely not a deal-breaker. 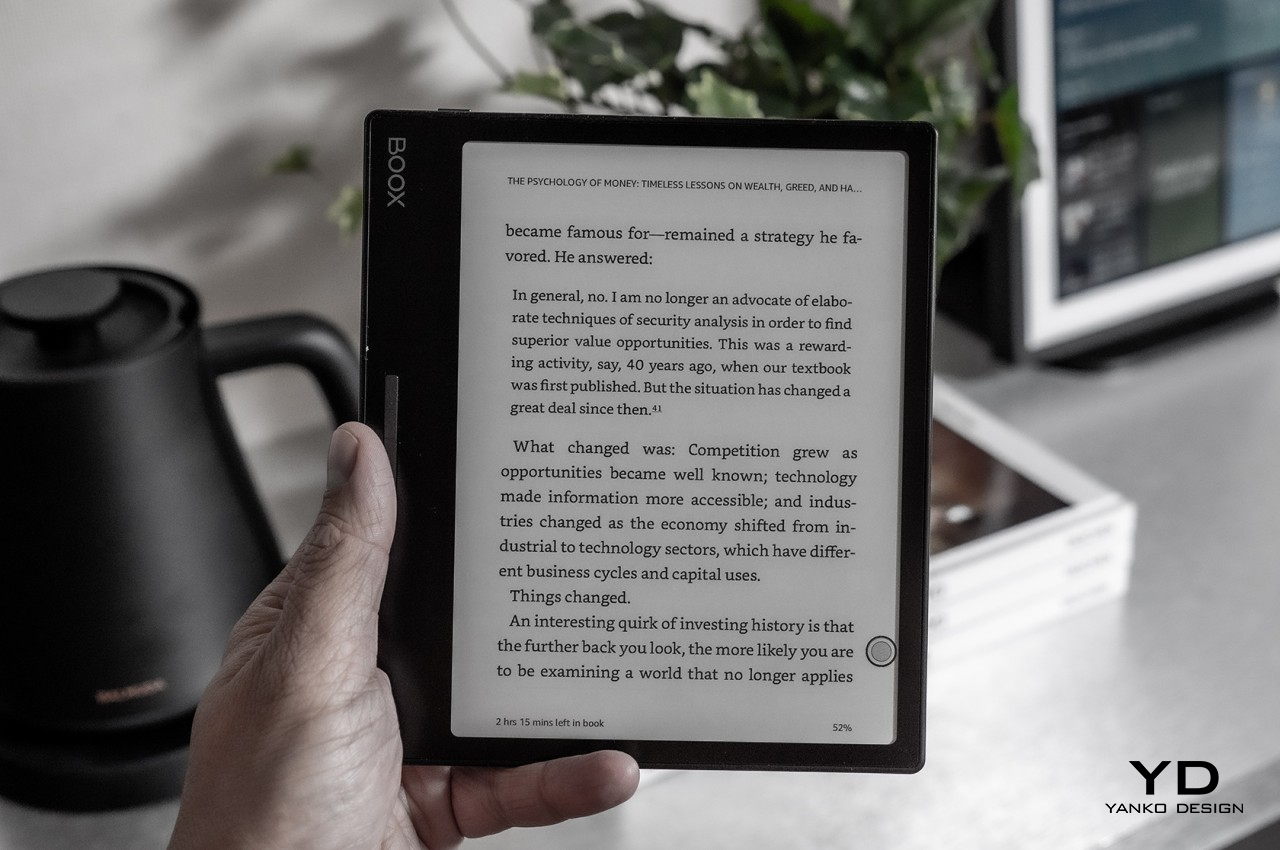 Even better, the device has a G-sensor that can detect the orientation of the device and adjust its contents accordingly. What this means is that you can comfortably use the BOOX Leaf 2 whether you’re right-handed or left-handed since you can rotate the device to where you’re most comfortable rather than letting its form dictate the way you use it. This is one of the major flaws of eReaders with “spines” like this, so it’s great that Onyx has finally resolved it.

Like all E INK displays, the BOOX Leaf 2’s screen doesn’t emit light on its own, but it does include front lighting to let you read in the dark. These lights don’t shine in your direction, saving your eyes from strain. There are two lights, cold and warm, that you can adjust independently to mix to your tastes. Contrast can also be adjusted on a per-app basis, so you can have different settings for different reading apps, depending on what you’re comfortable with. All in all, the BOOX Leaf 2 lets you decide how you want to use it rather than dictating its terms.

Today’s eReaders are a far cry from yesteryears models when it comes to hardware and power. Although not in the realm of phones and tablets, the BOOX Leaf 2’s quad-core processor, 2GB of RAM, and 32GB of expandable memory are plenty for something that is designed for just reading. Then again, the device is definitely more than your average reading device.

It runs Android 11, which means you can install a wide variety of apps on it, even those that might not make sense on an eBook reader. It also supports running Google Play Store, and although it needs some extra steps to enable, you won’t have to go out of your way to get it up and running. These two facts alone open a whole world of content and uses for the device, including watching videos or playing mobile games. For reading, it also means you’re not locked into a single content provider and still have access to Amazon, Kobo, and other libraries of your choosing. 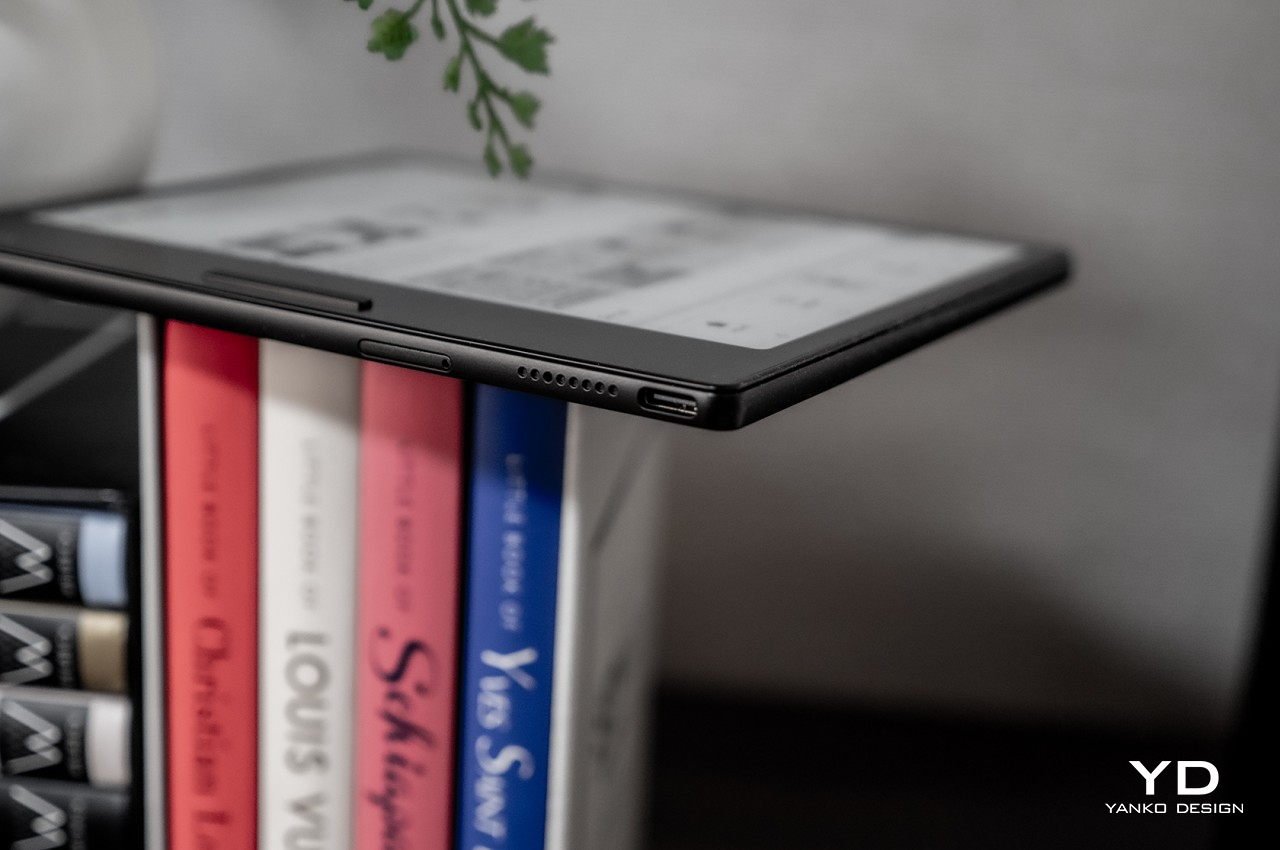 The BOOX Leaf 2 bears a 7-inch E INK Carta 1200 display with a resolution of 1680×1264, giving it a rather high pixel density of 300PPI. That means that content will always be crisp and clear, at least as far as grayscale content goes. It is definitely a pleasure to read eBooks and manga on the device, though the size makes it less ideal for certain types of content. You will find yourself pinching to zoom a lot on newspapers and magazines, which could be inconvenient but definitely not unusable.

Like almost all of Onyx’s devices, the BOOX Leaf 2 offers four display modes that speed up the refresh rate at the expense of resolution and quality. For the majority of reading content, you’ll want to be on Normal mode for the best quality with a bit of ghosting. But if you ever feel the need to watch black-and-white videos or play games, the fastest “X” speed will make do. The device does have two speakers and two mics for multimedia, but these are more for recording voice notes or playing podcasts than for a multimedia experience.

What the device doesn’t have is a Wacom digitizer layer, which means it doesn’t support the use of a stylus for taking handwritten notes or sketching. That feature has always been an extra for eReaders, though it has now become more common that even Amazon added it in the Kindle Scribe. It doesn’t take away anything from the BOOX Leaf 2, though, and its simplicity might actually appeal to more readers, especially those with more limited budgets.

Because of its plastic construction, the Onyx BOOX Leaf 2 suffers from the same sins as almost all eBook readers when it comes to environmental impact. There are some eReaders, including a few from Onyx, that do use metal, but these do come at the cost of adding some heft to the device. Given its objective to be a basic eReader, Onyx had to prioritize portability and price above other aspects, and we can’t really fault it for that.

What makes the overall longevity of the device a bit more worrisome, however, is its lack of any sort of dust or water resistance guarantee. Given how delightful it is to use, owners might be tempted to bring it anywhere and everywhere, forgetting that it might not be able to withstand accidents. That, in turn, would mean having to either repair or replace damaged parts, which adds to the BOOX Leaf 2’s negative impact on the environment in the long run. 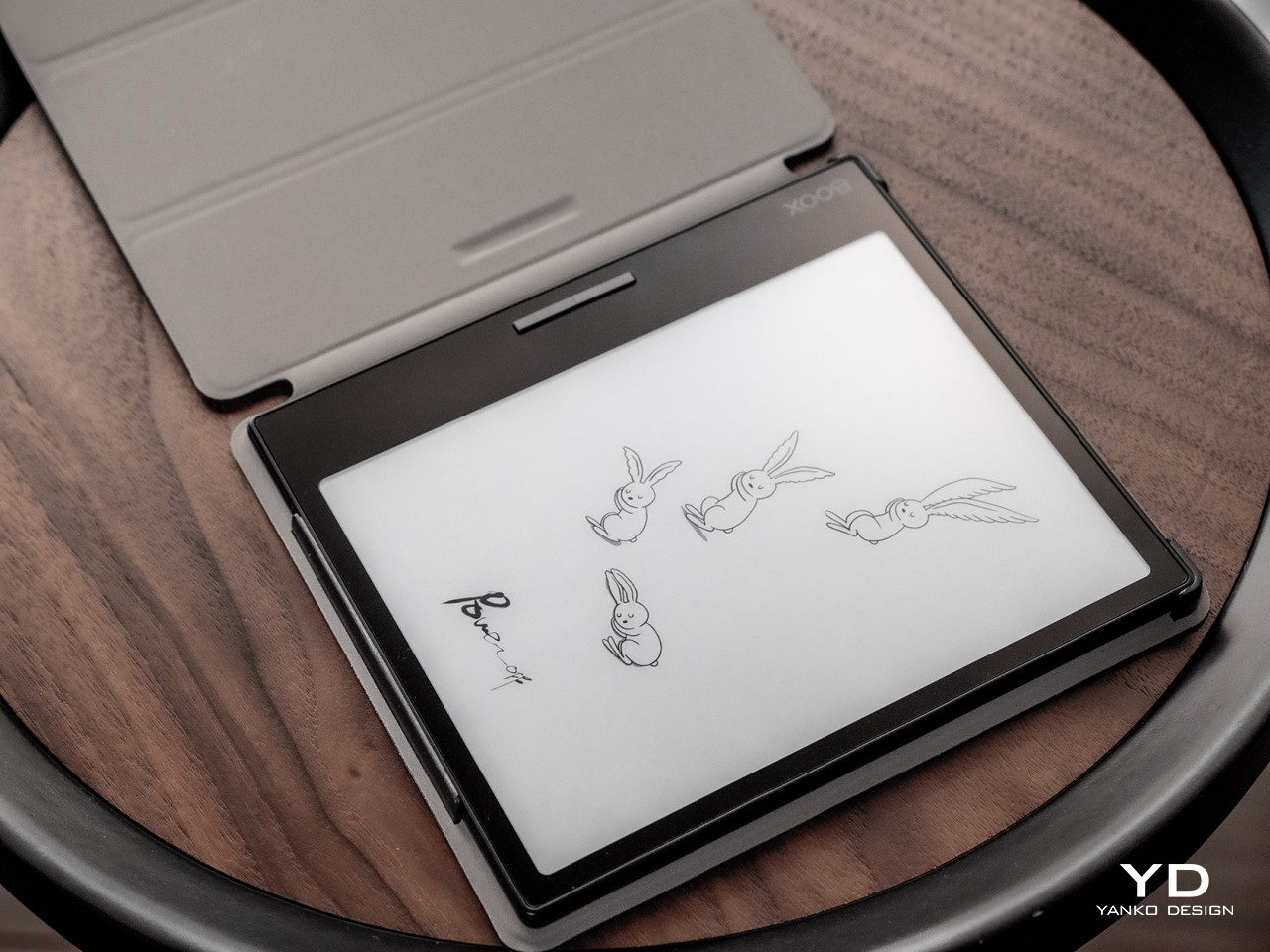 Onyx is one of the most prolific eReader manufacturers these days, aiming at almost every market segment and price tier. Its most recent slate of devices has focused a lot on powers and features, even going as far as introducing a true Android tablet with an E INK display and user experience. Given that trend, some of the brand’s fans may have feared that Onyx has forgotten its roots and snubbed those with simpler needs. The BOOX Leaf 2 is clear evidence that it isn’t so.

At $199.99, the BOOX Leaf 2 is clearly targeted at entry-level users, those who just need a no-frills eBook reader with none of the extra bells and whistles. At the same time, however, the device isn’t really lacking in any feature, especially when it comes to support for apps and almost all kinds of digital content imaginable. As far as a comfortable and pleasant reading experience is concerned, the BOOX Leaf 2 comes close to perfect, and that price tag easily pays for itself over time if you’re any type of bookworm.

It might come as a surprise, but people do plenty of reading on their phones compared to watching videos or playing games. That includes reading from the Web or social media, activities that would eventually tire eyes out, if not damage them in the long run. E INK displays are designed exactly to make reading comfortable and enjoyable, and the Onyx BOOX Leaf 2 delivers that kind of experience in an ergonomic and flexible package. Sure, we wished the device had a more sustainable form and that the company would take bolder steps in that direction, but other than that, there are very few flaws to note on this device. Plain yet elegant, simple yet powerful, the BOOX Leaf 2 offers a well-rounded eReading device with a price tag that many will be able to reach. 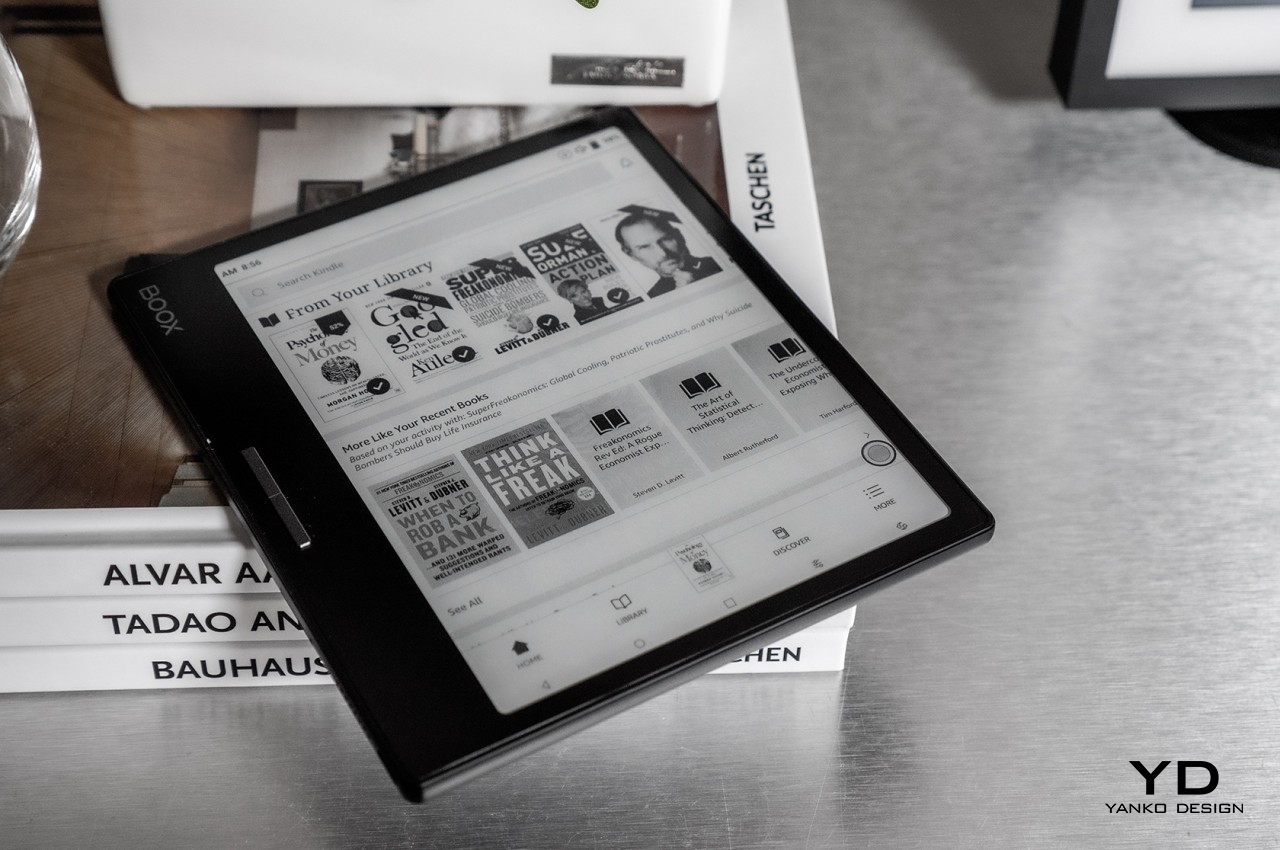 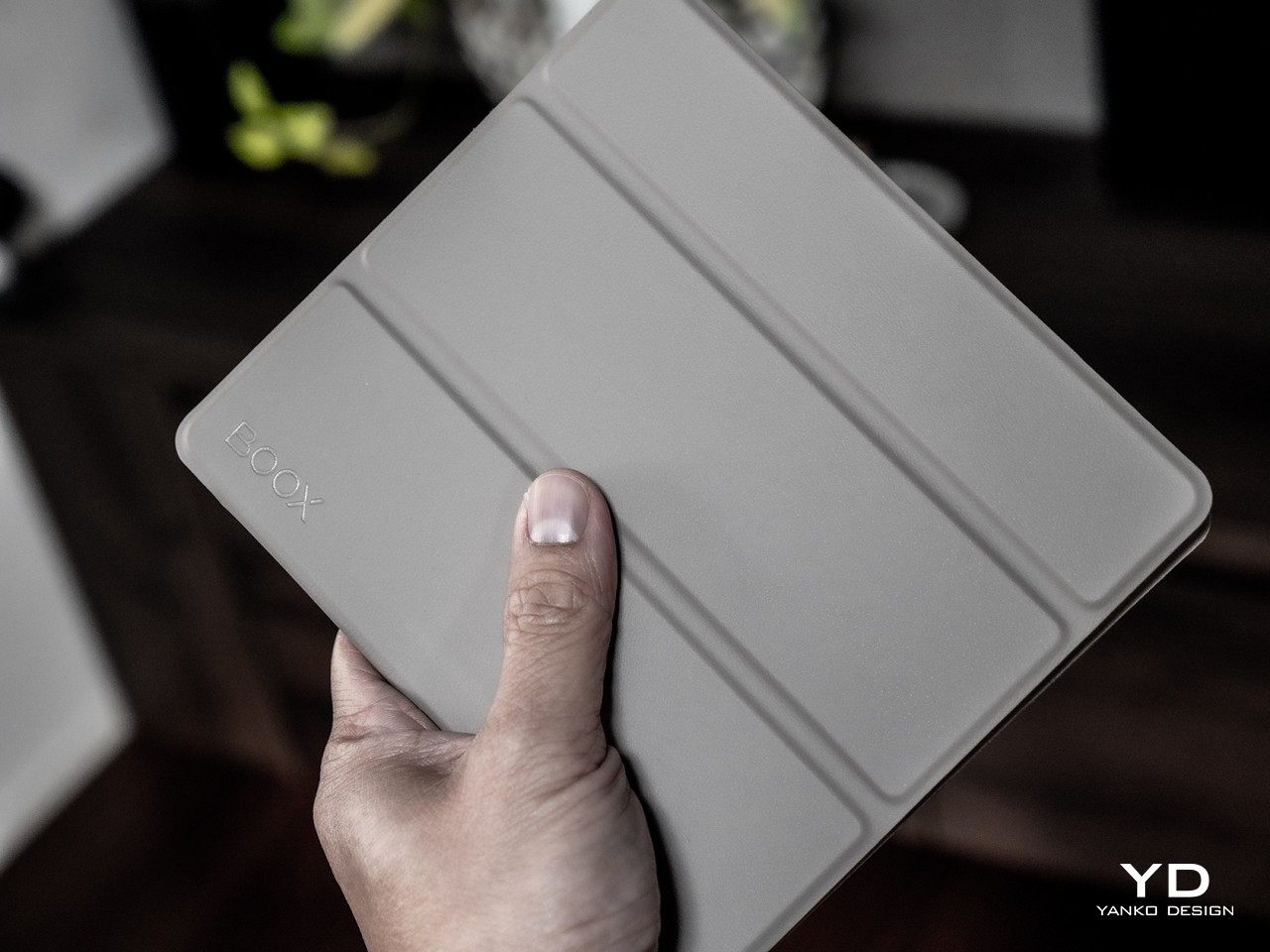 #How to Improve Your Apple Watch’s Battery Life: 12 Tips #Likewise Has Great Recommendations for All Kinds of Entertainment – Review Geek 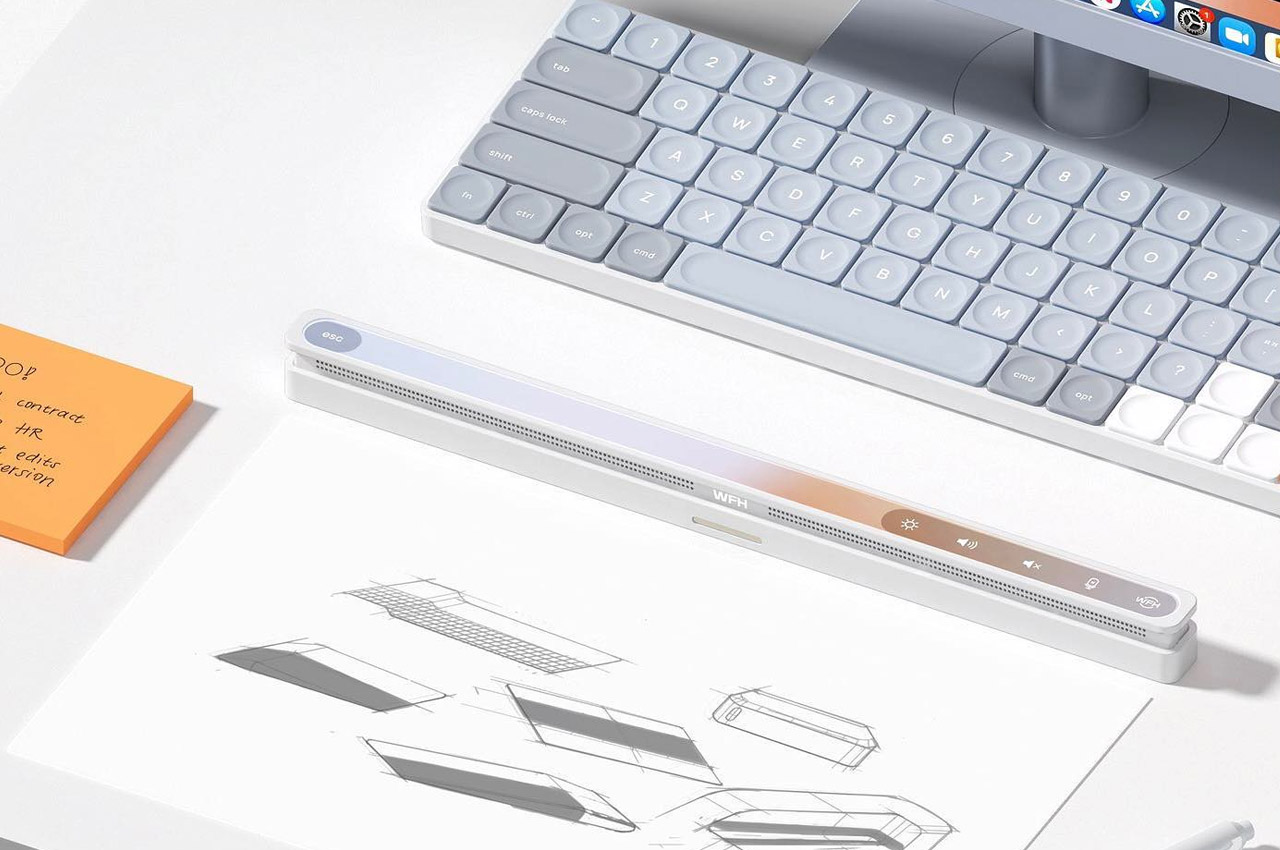