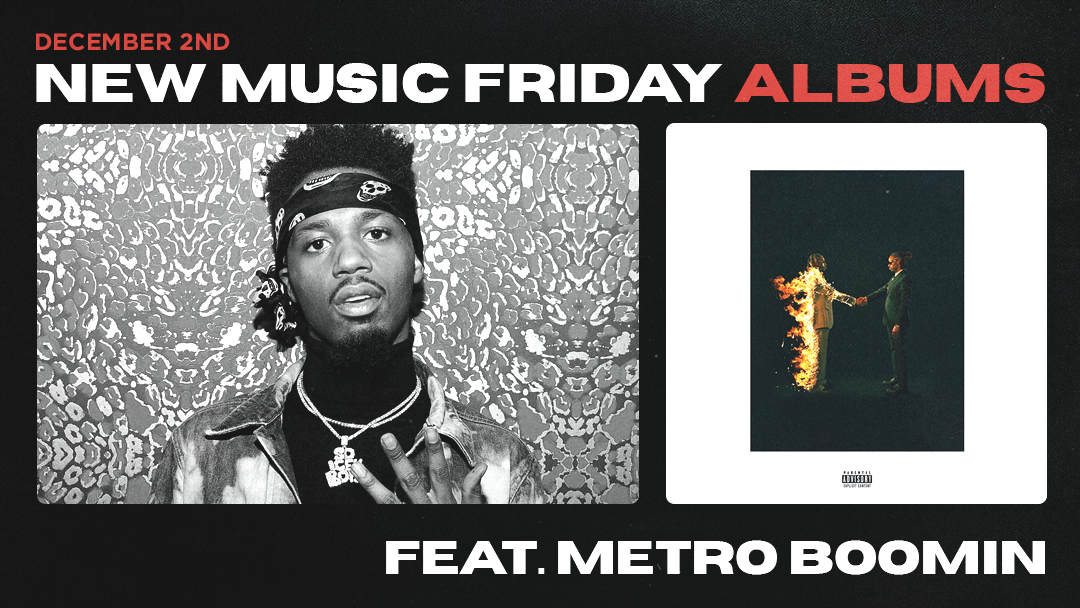 Check out the full list of new albums released on December 2 below.

Metro Boomin has assembled The Avengers of the Hip Hop universe to help him save the rap world as we know it with his triumphant Heroes & Villians album.

Complete with a Marvel and DC Comics-rivaling rollout featuring theatrialc video trailers and mock comic book covers that double as guest feature announcements, Metro Boomin has pulled out all of the stops for his first full-length solo release since 2018’s Not All Heroes Wear Capes.

Babyface Ray has quickly become one of the top new rap acts to permeate from the city of Detroit and it’s primarily because of his calculated consistency.

His 2021 lyrical, stylistic breakthrough project Unfuckwittable — home to fan-favorite records such as “Paperwork Party” featuring Jack Harlow — set the stage for his 2022 masterwork FACE. Now, on the heels of the deluxe edition of FACE, Babyface Ray embarks on yet another transcendental campaign with the release of MOB.

Along with appearances from Blxst and Nija, the 18-track project includes featured guest verses from artists such as Lil Durk and GMO Stax, among others.

The estate of deceased rapper Lil Peep has been working diligently to keep the memory of the genre-bending rapper alive.

Lil Peep (real name Gustav Elijah Åhr), passed away nearly five years ago on November 15 — and yet his popularity has stood the test of time as the “Beamer Boy” rapper’s current Spotify monthly listeners tally swells beyond 13 million users.

Closely following the re-issued release of his breakout 2015 track “Flannel,” and what would’ve been Lil Peep’s 26th birthday, the rapper’s estate delivers his posthumous album LIVE FOREVER. The exclusive release compiles several previously unavailable original tracks from Lil Peep’s illustrious catalog, including some of which were released nearly six years ago.

Yungeen Ace — Survivor of the Trenches

At a glance, it’s somewhat hard to believe how quickly Yungeen Ace has come up in the rap game.

However, when taking a second look at his burgeoning discography, the proof is in the pie as the Florida native has managed to deliver four full-fledged LP’s since his defining 2020 Don Dada album.

For his second release of the year, Yungeen Ace continues trailblazing his own path on his rugged Survivor of the Trenches album — which includes features from EST Gee, SleazyWorld Go, Rob49 and more.

Akon has an affinity for identifying talent in artists along with an eye for emerging technology within the world.

After all, he did nearly sign Billboard chart-topping rapper Moneybagg Yo and is also in the midst of building a multi-billion-dollar, crypto currency-powered tech city in Africa, in his native country of Senegal.

It’s also part of the reason why Akon’s Konvict Kulture record label has teamed up with social media giant TikTok to release his compilation EP TT Freak. The extended playing record includes contributions from artists such as African sensation Nektunez and the Atlanta-bred rapper Amirror.

Powfu — Surrounded By Hounds And Serpents

#Hilarie Burton Broke Down Filming One Tree Hill Love Scene With Chad Michael Murray: ‘I Felt Like A Prostitute’