White man knocked out and kicked by a group of black men on the London underground as passengers cheer and call him a “racist”. pic.twitter.com/5fEoM9my1d

This racist was flushed down the Tube.

The unhinged straphanger was knocked out cold in a caught-on-video punch aboard a London Underground car after hurling abuse at a group of black passengers, whom he referred to as “pets.”

“This is my home and you’re all going back, and you know it as well,” the maniac yells in the shocking video shot on the Central Line, the Independent reported.

A woman apparently behind the camera then asks: “What’s that supposed to mean? What does being black have to do with anything?”

The man begins swaying from the handrail as he shouts “lesser than us, they’re lesser than us” — and calls the group his “pets.”

In another clip, the deranged straphanger approaches a group of black passenger and provokes them as they get off at the Bank Station in central London.

Suddenly, one of them delivers the coup de grâce – a vicious right hook that sends him to the floor in a heap to some laughter.

A man checks the pulse of the unconscious instigator as a woman says off camera: “Don’t help a racist.”

His knockout garnered 2.2 million views as of early Monday afternoon.

A British Transport Police rep said they were “aware of two videos on social media showing an incident on a Central Line Underground train on 15 August,” the Independent reported.

The investigation is ongoing. 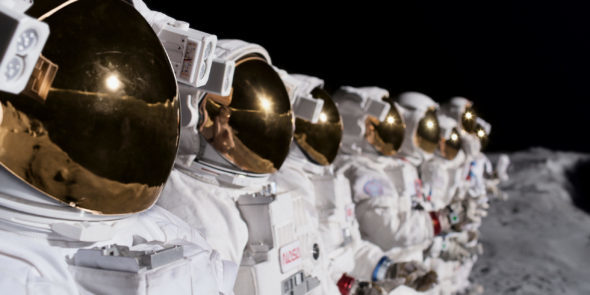