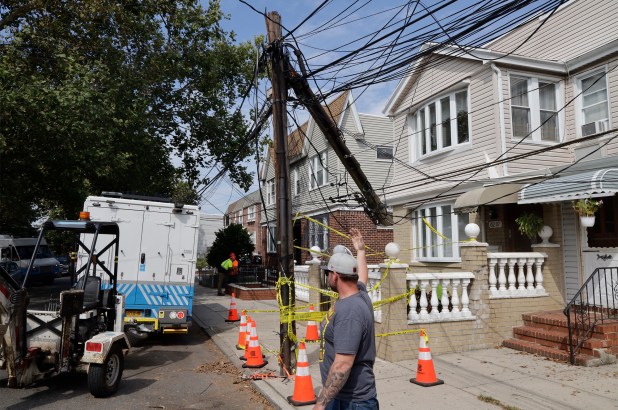 Isaias ripped through the Empire State on Aug. 4 — impacting a combined 1.3 million customers in the Hudson Valley, on Long Island and in New York City, according to records kept by the Public Service Commission which regulates New York’s utility companies.

“Throughout this period, some utilities provided inaccurate information, making it challenging for families and businesses to plan. This was more than inconvenience. It was completely unacceptable and a public health and safety concern,” PSC Chairman John Rhodes told lawmakers.

He said his commission’s now two-week-long investigation has exposed service failures from Con Ed, PSEG and Central Hudson resulted in individuals experiencing multiple days with no electricity or internet service, and thousands were out of power as many as ten days after the storm.

The PSC said the trio is being investigated for poor response communication, response efforts and insufficient crew deployed which crippled companies’ ability to fix downed lines and reestablish connection in a timely fashion.

Meanwhile, Gov. Andrew Cuomo announced Wednesday plans to introduce  legislation that would make it easier for the PSC to revoke a utility companies’ license should they prove a repeated pattern of service delivery failure.

However, outraged lawmakers argued it’s too little, too late.

Assemblyman Bobby Carroll (D-Brooklyn) was so fed up he asked his peers to let him cut the question line — explaining he is getting married this weekend — and asked Chairman Rhodes at what point the PSC actually revoke a company’s license.

Rhodes replied: “It’s laid out in a statute and it would basically… a demonstrated inability to deliver for New Yorkers based on repeated failures.”

“Haven’t they already demonstrated that? I mean, they continue to get rate hikes, they continue to have the exact same problems over and over again why would we continue to keep doing this same dance if every year or other year we have this exact same hearing?” he seethed, referring back to last summer’s days-long blackouts that plagued the five boroughs and forced lawmakers to hold hearings on Con Ed’s response — which the PSC was investigating at the time.

“That’s why it’s on the table,” Rhodes replied.

That investigation has yet to conclude but is “nearly finalized,” according to a PSC spokesman.

“I’m just concerned about a storm coming in next week or the week after,” state Sen. James Gaughran (D-Suffolk) added, concerned about reliving days of his office’s phone lines were inundated with panicked constituents in the storm’s aftermath.

PSEG chief operating officer and president Dan Eichorn admitted during his own testimony that poor communication and general system inundation resulted in an overall slowed system.

The company has also agreed to give up roughly $8 to $10 million to customers seeking reimbursements for spoiled food and medicine, forfeiting funds from company incentive programs — or bonuses.