Gov. Andrew Cuomo on Friday said Buffalo police shoving a 75-year-old protester, causing him to fall and bash his head, was “fundamentally offensive” behavior — and called for the officers involved to be fired and charged criminally.

Cuomo played video of the encounter, which happened Thursday soon after the city’s curfew went into effect.

“You see that video and it disturbs your basic sense of decency and humanity. Why? Why was that necessary?” the governor said. “An older gentleman — where was the threat? And then you just walk by the person when you see blood coming from his head.

Cuomo added that he talked to the man, who was identified by The Buffalo News as Martin Gugino, 75, who is affiliated with the Western New York Peace Center activist group.

The video shows the man in a face mask walking up to cops in riot gear and one officer pushing him, causing him to stumble backward, fall and smash his head on the pavement.

Blood instantly pools from his head as the man lay motionless. One cop bends down to check on him but is pulled away by another officer.

Two of the officers involved in the incident have been suspended without pay pending investigation, Buffalo Mayor Byron Brown said.

“But I would say the city should pursue firing,” the governor said. “And I think the district attorney should look at the situation for possible criminal charges and I think that should be done on an expeditious basis.”

Erie County Executive Mark Poloncarz said Friday that the man was listed in serious but stable condition at Erie County Medical Center. The man was said to be “alert and oriented.”

“He’s a gentle person who really believes that he must stand up for what he thinks is right,” a friend of Gugino, Terrence Bisson, told The Buffalo News. 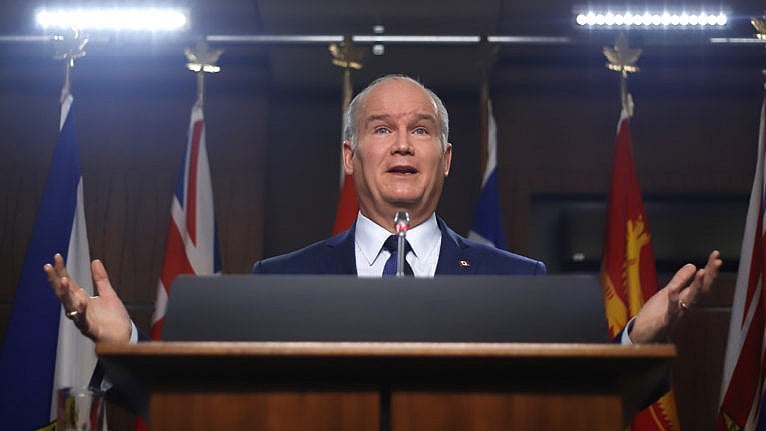 #Erin O’Toole is going down swinging—at his own party