#COMPASS -Combat Providence Analysis System, an online real-time strategy / battle-action smart phone game distributed by NHN PlayArt Corp. and Dwango Co., Ltd., is celebrating its 6th anniversary in Japan with the announcement of an animation project. Aside from the publication of an official home page and a teaser trailer (below), no further details about the animation project (such as the cast, the crew, the format, or the release window) have yet been revealed.

#COMPASS—Combat Providence Analysis System is a real-time online strategy game in which three players team up and battle against other teams to capture points placed on a virtual map. One battle lasts for three minutes. In addition, to prepare for battles, players can collect skill cards that allow a variety of strategies through different card combinations and arm themselves with the strongest deck of cards. This is a PvP game of an entirely new genre, in which the elements of action games, strategy games and card games are all condensed and packed into three-minute-long battles. 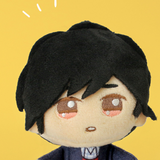 #FEATURE: How Geography Affects Battle in One Piece

#Tower of God WEBTOON Returning on May 30