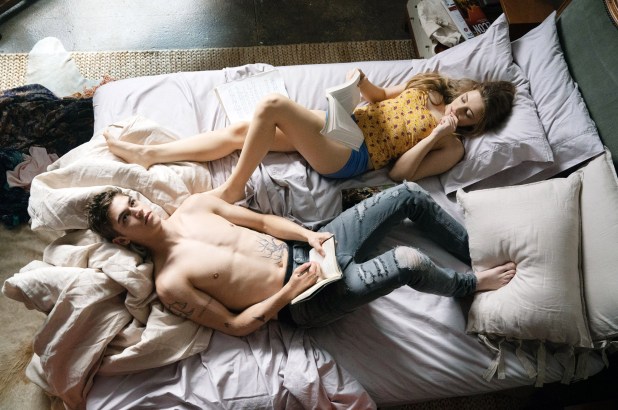 Hero Fiennes Tiffin and Josephine Langford in “After.”
Everett Collection

Somebody, please save the children!

Not from the great white sharks slumming it in the Hamptons this summer, or from videos of idiots dancing on TikTok. Rescue America’s youth from the dangerous young-adult film.

Kids, Whitney Houston told us, are supposed to be our future, but with their godawful taste in entertainment, I’m praying that science might come up with a viable alternative.

Misogyny, stereotypes and a creepy preoccupation with death saturate these movies — and the occasional TV show — and yet they lurk on Netflix with the most innocent of designations, such as “Rated 12.”

“The Kissing Booth 2,” out Friday on Netflix, has been deemed suitable for anyone 12 and older. That means it includes the educational term “c - - kblock” and a plot in which the main characters rope in hot people — “A-listers” — to be a part of their blindfolded, high-school kissing booth for charity.

It didn’t take the #MeToo movement to teach us that lining hormonal teens up at an official function to make out with randos has its drawbacks. And, of course, every parent’s dream for their child is that they grasp the concept of “c - - kblocking” before they reach eighth grade.

The characters also drink, have sex and discover the earrings of other young women under their boyfriend’s bed. In the first film, Elle accidentally wanders into the men’s locker room, and a pack of shirtless boys surround her, call her names and take cellphone videos of it all.

Netflix bigwig Ted Sarandos said that was “one of the most-watched movies in the country” in 2018. Wonderful.

The genre is otherwise dominated by super-serious love stories that, in the past 10 years, have favored two fraught templates: a relationship torn apart by terminal illness or suicide.

The hot-button Netflix drama series “13 Reasons Why,” which has squeezed four seasons out of practically nothing, provoked outrage in 2017 when viewers realized it’s a glam mystery show about a teen girl’s suicide. A character also kills himself in that streaming service’s recent film “All the Bright Places” — and at a picturesque lake, no less.

Who the hell is running Hollywood these days? Wednesday Addams?

I recognize that people will read my mean finger-wagging and excitedly point out that young people encounter much worse material on the internet. That’s true. Your kid’s probably selling a monkey brain on the dark web even now.

But it’s not just the objectionable subject matter, but the way it’s so often packaged with lazy witlessness and stupidity.

In the original “Kissing Booth,” when Elle learns that a friend has been threatening boys not to ask her out, a suitor tells her: “No boobs are worth a broken nose.”

She retorts: “Whatever! Leave! But just so you know, my boobs are fantastic! Yes, some would even say breathtaking!” This vacuous nonsense occurs at an arcade between high-school juniors who are obsessed over by tweens around the world.

Of course, the smart tweens will quietly observe their peers’ lemming-like love of self-destructive entertainment and blatant sexism and decide then and there to become a therapist or a human resources director. In 20 years, they’ll be rich! # GME drops 14% as GameStop announces plans to sell up to 3.5M shares