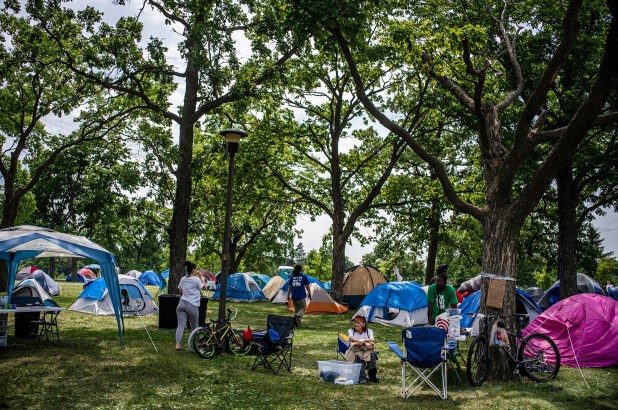 A homeless encampment at Powderhorn Park in Minneapolis, Minnesota.
AP

A Minneapolis neighborhood has been overrun by a homeless encampment that’s grown to as many as 300 people — amid an agreement among progressive white residents to not call the police, according to a new report.

The tent city has popped up in a park in Powderhorn Park — a diverse community of about 9,000 that’s blocks away from where George Floyd was killed last month.

In light of Floyd’s police-involved death, residents there have vowed to avoid calling the cops, feeling that doing so could put people of color in danger. But now with hundreds of outsiders flooding the park — drawing in more car traffic, including drug dealers, and resulting in at least two overdoses — the neighbors are facing a moral dilemma.

“I am afraid,” one of the residents, Shari Albers, told the New York Times. “I know my neighbors are around, but I’m not feeling grounded in my city at all. Anything could happen.”

Mom Carrie Nightshade was among a group of white women who promised to ignore any property damage, including to their own homes, and filed for a block party permit to limit cars in the neighborhood. The women also agreed to call the American Indian Movement, a group formed in Minneapolis in 1968 to address police brutality, instead of law enforcement if they witnessed physical violence.

But now, she feels uneasy about letting her two kids, ages 9 and 12, play alone in the park.

“I’m not being judgmental,” Nightshade said. “It’s not personal. It’s just not safe.”

Mitchell Erickson resorted to calling police last week when he was cornered outside his home by two youths, one of whom pointed a gun at his chest while demanding his car keys. After he unwittingly handed over a set of house keys, the boys became frustrated, then fled. They stole a different car down the street.

Initially, Erickson, who lives a block from the park, told the Times that dialing 911 was the right thing to do. But a couple days later, he regretted it.

“Been thinking more about it,” he texted the Times. “I regret calling the police. It was my instinct but I wish it hadn’t been. I put those boys in danger of death by calling the cops.”

Asked about his life being put in danger, Erickson added, “Yeah I know and yeah it was scary but the cops didn’t really have much to add after I called them. I haven’t been forced to think like this before. So I would have lost my car. So what? At least no one would have been killed.”

Joseph Menkevich also thought twice about calling police when he found a black man with a hospital bracelet passed out in the elevator of his building. He ultimately called 911, requesting an ambulance, after first calling a community leader who didn’t pick up.

“It didn’t resolve in a way that I had hoped,” Menkevich said. “All they did was offer to bring him back to the hospital. He refused, so they kicked him out on a rainy night.”

Meanwhile, Albers’ daughter, Tobie Miller, said she doesn’t blame the illegal activity in the park on the displaced residents.

“My feeling around it is those are symptoms of systemic oppression,” said Miller, 34, who recently took a class on racial biases. “And that’s not on them.”

Two weeks ago, 25 tents were pitched in the park after displaced people were booted from a makeshift shelter at a former Sheraton hotel, the Star Tribune reported. By last Thursday, the encampment had grown to 200 tents.

Last week, the Minneapolis Park and Recreation Board of Commissioners passed a resolution allowing the homeless to remain in Minneapolis parks, Patch reported.

“We realize that this is not a permanent solution, so we are asking the City of Minneapolis, Hennepin County and State of Minnesota to step up and find a sustainable, dignified housing solution for folks who are experiencing homelessness right now,” said Park Board president Jono Cowgill in a statement. “In the meantime, we are not going to push people out of public spaces when they have nowhere else to go.”