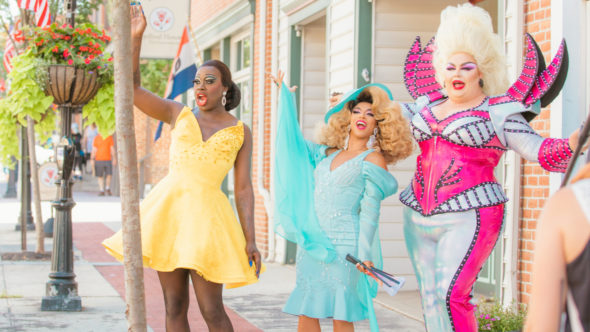 The unscripted series “travels to small towns across America, inspiring local residents to share their stories and express themselves in a night of no-holds-barred, full-on drag.” Bob the Drag Queen, Eureka O’Hara and Shangela Laquifa Wadley star.

We’re Here debuted its first season on HBO in April. Read more about the season two renewal below:

“We’re Here resonates in ways we had hoped for but couldn’t really have anticipated,” said Rosenstein. “The stories of our small-town drag daughters created an incredibly positive communal experience. We can’t wait for Bob, Shangela and Eureka to continue their journey helping others find their voice.”

Season one towns included: Gettysburg, PA, Twin Falls, ID, Branson, MO, Farmington, NM, and Ruston, LA. The season finale aired last night, with a dive into the queens’ own stories of struggle and perseverance, ending with a celebration of love and taking pride in oneself.

WE’RE HERE is available to stream on HBO GO, HBO NOW, and on HBO via HBO Max and other partners’ platforms.”

What do you think? Have you seen We’re Here? Will you watch season two?

#The Barbarian and the Troll: Nickelodeon Reveals Premiere Date for Puppet Comedy Series