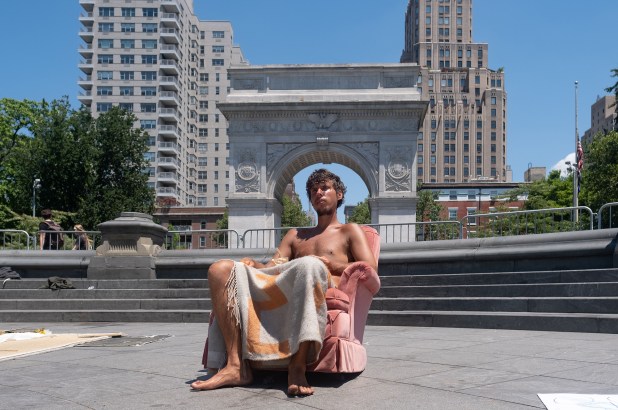 It’s in the heart of Greenwich Village, with 360-degree park views, ample space — and no rent!

Washington Square Park’s famed fountain has been turned into a private crash pad by a troubled homeless man — who has been allowed to stay by a city administration afraid to tackle any quality of life issues.

Matthew John Mishefski, 25, said he has been squatting at the drained New York landmark since May, in a makeshift home that now includes comforts such as a table, six chairs, a pink recliner, a box of clothes and a colorful beach umbrella.

Mishefski’s presence in Washington Square Park is well known to police — who arrested him at around 12:15 a.m. on June 13 after they say he refused to leave the park after hours.

He was hit with charges including criminal trespass and failure to comply with signs — but then released after a short say in a hospital for evaluation.

He was soon back at his encampment, and police claim they have been able to do nothing since — saying they have been begging the city to get him help.

“Obviously the commanding officer [of the local 6th Precinct] is aware with many 311 calls and community members reaching out,” an NYPD spokesman said. “He has made numerous calls to parks department and several attempts to provide services. They are trying to get him help.”

A spokesperson for the city Department of Homeless Services said that outreach workers canvass the area four times a week to engage with Mishefski — but can’t convince him to leave.

“While we cannot discuss specific cases, which are protected by client confidentiality, we can confirm that as part of our City’s 24/7/365 outreach efforts, outreach teams visit regularly to engage individuals who may be living unsheltered, including this individual, offering them services and supports,” said Isaac McGinn.

“We remain undeterred and will keep coming back to build trust, make those breakthroughs and help them get back on their feet.”

A Parks Department employee at the Manhattan green space on Thursday didn’t appear to have any issues with the encampment. 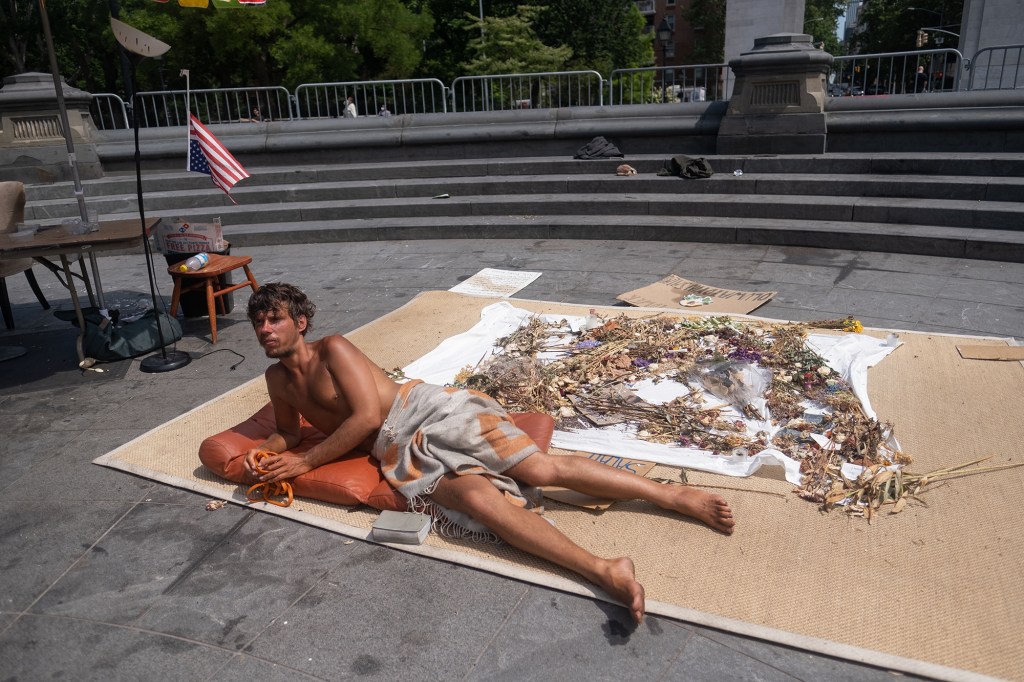 Matthew John Mishefski laying down at his setup inside the park’s fountain. 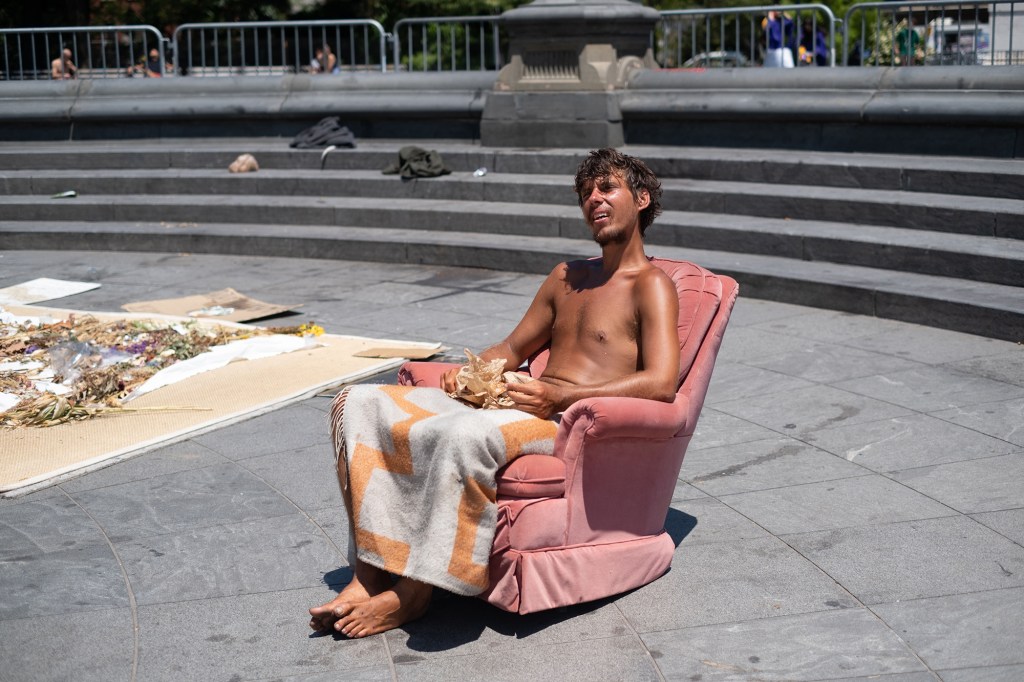 Mishefski sits in a chair in the park’s fountain. 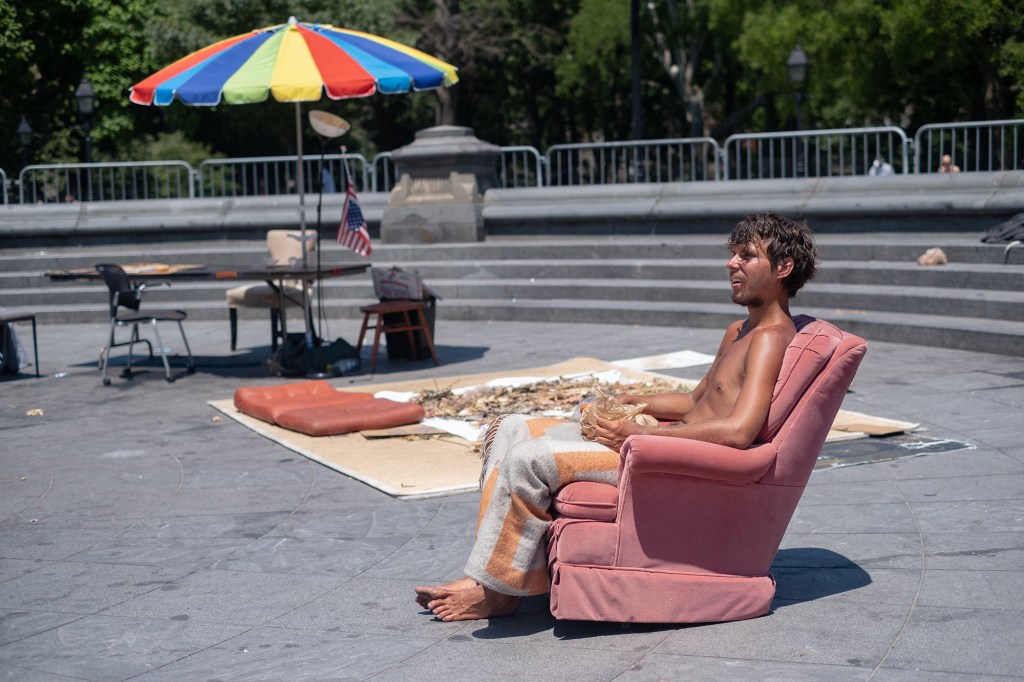 The Department of Education gets an F for its planning…

When The Post spoke to Mishefski Thursday, he said he suffers from autism and has been in and out of psych wards, including a five-week stay at Woodhull Hospital sometime before March.

He said he has been living in the park since May, and moved into the fountain after the cops took away a mobile home he had been living in.

“It’s a representation of the altar to god,” the shirtless man — who sometimes refers to himself as “Son of God Lord Savior Jesus Christ” — told The Post on Thursday, referring to the concrete platform holding the fountain, which is cordoned off by metal barricades.

“This is a spiritual zone,” added Mishefski, who is originally from Wyoming, Pennsylvania, but bounced from city to city before moving to the Big Apple in 2017.

He said he’d lived in and out of city shelters until November — but decided life was safer on the streets.

“People bring in knives, weapons, they say they’re going to hurt you if you say something they don’t like, if you look at them,” he recalled. “I had a staff member pull a knife on me.”

Passersby said the outdoor accommodations were an eyesore.

“The city isn’t doing a lot of things. They should get people to move off the streets,” said Kyshia Anderson, 26, who was at the park with her 6-year-old son. “They don’t keep it too clean. They should have removed that stuff from the fountain.”

#‘We’ve missed it’: Long lines form outside shops in England