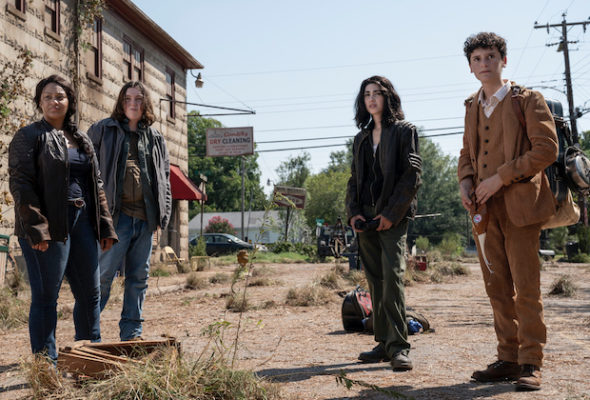 During a Comi[email protected] panel session today, AMC announced that the long-awaited season 10 finale of The Walking Dead will air on Sunday, October 4th, at 9:00 PM (the cable channel also ordered another six episodes). It will be followed by the series premiere of The Walking Dead: World Beyond at 10:00 PM. A special episode of Talking Dead will follow and both episodes will be discussed.

The following week, on October 11th, season six of Fear the Walking Dead will launch at 9:00 PM. It will be followed by the next installment of World Beyond and those two series will continue to air episodes back-to-back.

The Walking Dead: World Beyond delves into a new mythology and story that follows the first generation raised in a surviving civilization of the post-apocalyptic world. Two sisters along with two friends leave a place of safety and comfort to brave dangers, known and unknown, living and undead on an important quest. Pursued by those who wish to protect them and those who wish to harm them, a tale of growing up and transformation unfurls across dangerous terrain, challenging everything they know about the world, themselves, and each other. Some will become heroes. Some will become villains. But all of them will find the truths they seek.

Here’s a teaser for The Walking Dead: World Beyond, as well as the panel (which will be available for a limited time):

What do you think? Are you looking forward to the premiere of the The Walking Dead: World Beyond TV series? Is there room for another show in this AMC franchise?

#How these Yankees and Mets could fare in short season