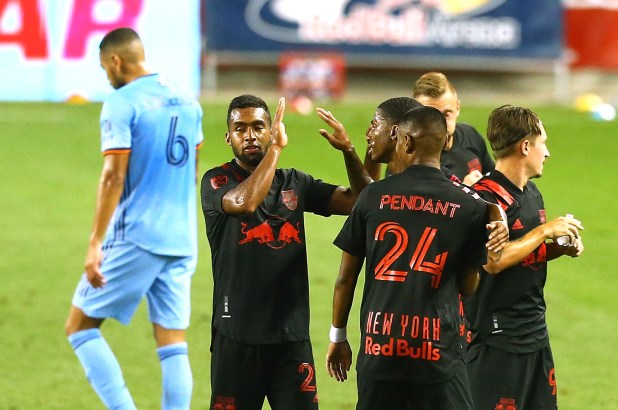 Kyle Duncan (left) celebrates with teammates after scoring the game-winning goal in the Red Bulls’ 1-0 win over NYCFC on Thursday night.
Getty Images

Kyle Duncan scored in the 59th minute to give the Red Bulls a 1-0 victory over NYCFC in the Hudson River Derby on Thursday night in Harrison, N.J.

NYCFC goalkeeper Sean Johnson bobbled Duncan’s shot from distance and a video review confirmed the ball crossed the goal line the Red Bulls improved to 3-2-1, and NYCFC dropped to 1-5-0.

It was the first game back for both teams following the recent MLS is Back tournament at ESPN’s Wide World of Sports Complex at Walt Disney World in Florida.

The Red Bulls didn’t make it out of the group stage at the tournament but have made recent moves to improve. They acquired forward Samuel Tetteh of Ghana, on loan from sister club Red Bull Salzburg, but he was not yet available to play.

NYCFC advanced to the quarterfinals of the tournament but fell to eventual champions Portland.

NYCFC was without Maxi Moralez because of a calf injury.

#‘High Fidelity’ canceled by Hulu after one rocking season

#Mother Nature serving up a trifecta of astronomical shows for July