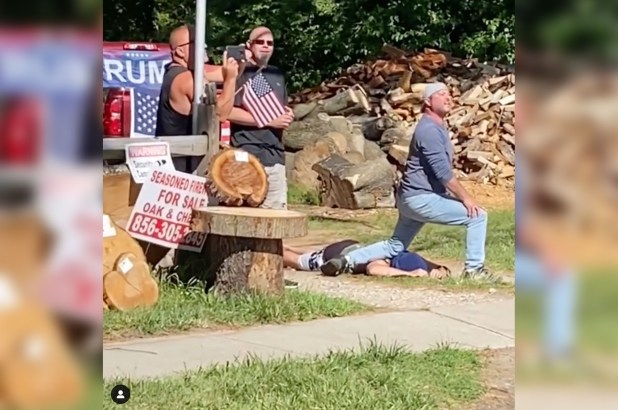 A group of men mocked George Floyd’s death along Delsea Drive at a protest in Franklin Township, New Jersey.

New Jersey’s Department of Corrections has started the process to oust one of its officers who was among a group of white men that mocked the death of George Floyd in view of Black Lives Matters protesters.

The department tweeted Thursday that “removal charges have been served” to the officer, identified by his union as Joseph DeMarco, resulting from his caught-on-camera June 8 antics in Franklin Township.

DeMarco, who had been suspended following the incident “was placed on non-pay status pending a due process hearing as part of the regular procedure for government unionized employees,” the department said in their tweet.

It’s unclear which man is DeMarco in the video, but the viral footage shows a man pretending to kneel on the neck of another lying on the ground as they shout at protesters marching by.

Others stood next to them in the yard of the property adorned with a “thin blue line” flag — showing support for law enforcement — as well as a large “All Lives Matter” sign.

At least one yelled, “If you don’t comply, this is what happens,” further mocking the death of Floyd, 46, who was pinned by a cop with a knee on his neck as he sobbed, “I can’t breathe.”

New Jersey Gov. Phil Murphy had called the incident “repugnant,” and wrote on Twitter, “I condemn this behavior in the strongest terms possible.”