After Tropical Depression 09E formed near the coast of southwestern Mexico, infrared data from NASA’s Aqua satellite helped confirm its transition to a tropical storm.

The infrared imagery gathered on Aug. 9 at 4:55 a.m. EDT (0855 UTC) that helped make that confirmation included data from the Moderate Resolution Imaging Spectroradiometer or MODIS instrument. MODIS flies aboard NASA’s Aqua satellite. MODIS gathered temperature information about Elida’s cloud tops. Infrared data provides temperature information, and the strongest thunderstorms that reach high into the atmosphere have the coldest cloud top temperatures.
MODIS found the most powerful thunderstorms were around the center of circulation, where temperatures were as cold as or colder than minus 80 degrees Fahrenheit (minus 62.2 Celsius). That area was surrounded by thunderstorms slightly less high in the atmosphere, but still powerful rainmakers with cloud top temperatures as cold as or colder than minus 70 degrees Fahrenheit (minus 56.6 Celsius). Cloud top temperatures that cold indicate strong storms with the potential to generate heavy rainfall.
At 5 a.m. EDT (0900 UTC) on Aug. 10, the National Hurricane Center (NHC) said the center of Tropical Storm Elida was located near latitude 18.3 degrees north and longitude 108.8 degrees west. That is about 145 miles (235 km) east-southeast of Socorro Island, Mexico. Elida is moving toward the west-northwest near 15 mph (24 kph), and this general motion is expected to continue through Wednesday. The estimated minimum central pressure is 995 millibars.
Maximum sustained winds are near 65 mph (100 kph) with higher gusts. Tropical-storm-force winds extend outward up to 60 miles (95 km) from the center. Strengthening is forecast during the next day or two, and Elida is expected to become a hurricane later today.
NHC cautioned, “Swells generated by Elida are expected to affect portions of the coast of west-central Mexico and the southern Baja California peninsula during the next couple of days. These swells are likely to cause life-threatening surf and rip current conditions.”
Tropical cyclones/hurricanes are the most powerful weather events on Earth. NASA’s expertise in space and scientific exploration contributes to essential services provided to the American people by other federal agencies, such as hurricane weather forecasting. 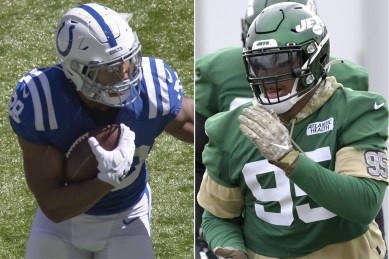 #Jets vs. Colts: Preview, predictions, what to watch for

Many No. 7 picks were busts, but Matt Harvey’s not one of them