The coronavirus pandemic has exponentially exacerbated screen addiction, easily preying on already tech-dependent populations suddenly out of work, locked in their homes and attempting to follow the breakneck news cycle.

For many, just the idea of using smartphones less — let alone taking a break from all technology while still in quarantine — is distressing.

But these folks took a tech-free meditation “retreat” right at home — and loved it.

“I had not been away from my computer for over two years; to pull myself away from all that, it gave me tons of anxiety,” says retreat participant Franz Aliquo. But much to the experiential event director and artist’s surprise, he found that the three days he spent off the grid in his Queens apartment flew by.

The retreat was originally planned as an eight-day silent meditation at Joshua Tree National Park in California, a midway “immersion” in the 3½-month online Alchemical Leadership program. “We were going to go to the desert for this,” program leader Larissa Conte tells The Post of the April excursion. Unable to safely travel or meet in-person, she reworked that portion of the program to be an at-home “quest.”

The eight participants range in age from their mid-30s to late-50s and live across America, with one Amsterdam-based individual. They planned solo retreats in a four-day window during which they intended to spend from 10 hours to the full period near home but without technology.

Aliquo spent his retreat going on long, aimless walks with his Shiba Inu, taking bubble baths, reading and making dishes from old hand-written recipe books. The only human interaction he had was some four words he exchanged with his roommate, and he abandoned his bed to live out of a comforter “nest” he created in his apartment hallway.

“It was like camping inside my house, 10 feet from where I usually sleep,” he says. While he admits the experience was “the weirdest s - - t and less comfortable,” the combination of removing tech and waking up in a space simultaneously familiar and unfamiliar was profoundly powerful, giving him the feeling of “openness and relaxation you get from traveling.”

“I thought that three days in that little area, not doing anything, was going to take forever and I would be dead,” he says. “But I really don’t know what the f - - k happened to the time, and it’s not like I was sleeping 12 hours a day.”

One Maine-based participant held an all-night fire in his yard while his wife and two daughters slept in the house.

“For my quest, I spent two days alone in nature fasting on water from dawn until dusk,” says creative strategist Lily Betjeman, of San Francisco.

After spending two days at home with her digital devices turned off, which she describes as “a feat in and of itself,” Jennifer Conti-Davies went on a 13-mile solo hike through a local preserve. “That was the first time I spent an entire day in nature alone,” she says. “It’s an incredible gift to slow down and listen.”

For her own retreat, Conte sheltered in her San Francisco apartment, went on walks through her Eureka Valley neighborhood, gardened and rested.

In reflecting on their experiences, she says, participants reported varying levels of difficulty with being tech-abstinent, but everyone said it ultimately gave them a feeling of massive relief. Aliquo says he’s also found himself using tech less since giving it up for a weekend.

Conte is not surprised, and despite the immensity of foregoing technology in 2020, she did not worry she was putting the group in danger with the activity.

“I’ve been guiding for over a decade. People can encounter wildlife, they can find scorpions, rattlesnakes — just having their phone in the off position? Not that big of a deal,” she says.

Being forced to stay in place was, in this instance, a surprise blessing, she says.

“So often people go on retreats far away from their home. There’s a magic in traveling because we assume beginners’ eyes when we travel,” she says. For her, the coronavirus has been a good excuse to try and find that magic at home. “Creating spaces to completely unplug and shift the way we view life —  especially at a time when the mystery is so loud and we don’t know what the future holds — lets us more consciously navigate our moment to moment.” 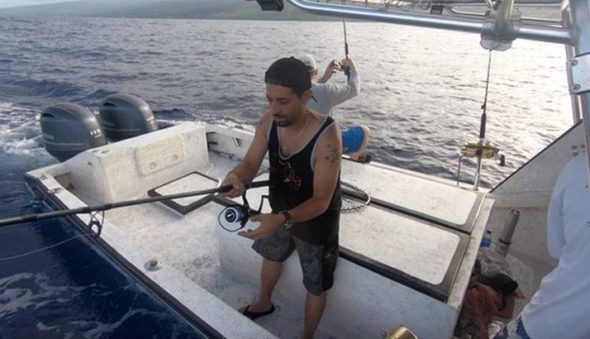