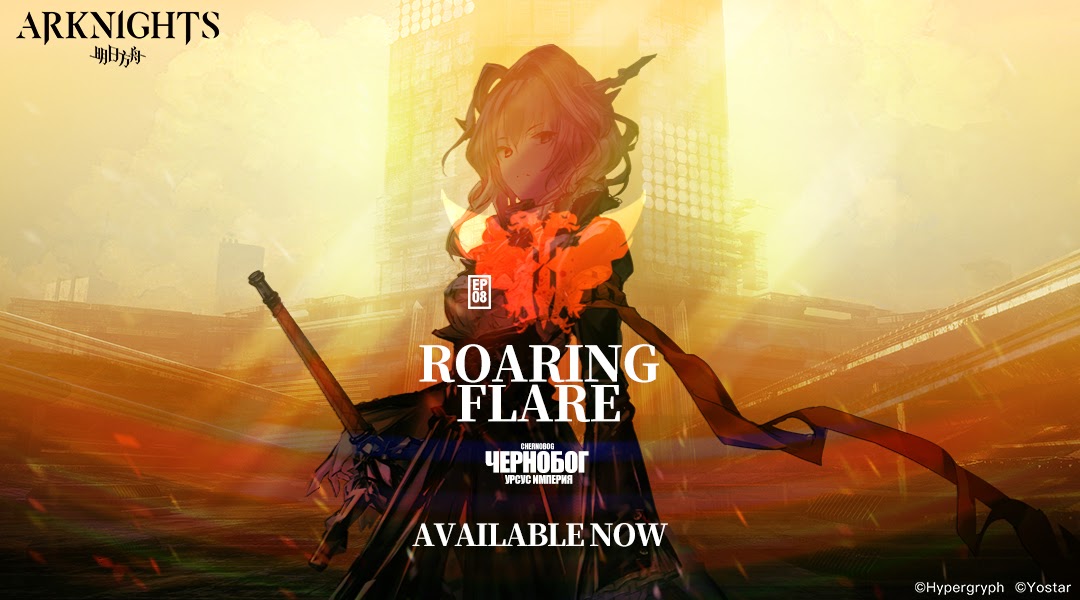 May 4, 2021 – Shanghai, China – The latest episode in strategic mobile RPG Arknights main storyline, Episode 8 – “Roaring Flare” launches today. The long-awaited episode features Talulah’s complex past intertwined between Reality and Memory. Players will experience Talulah’s pain and helplessness along with an immersive storyline. In addition to the episode update, the game is also being updated with four highly anticipated characters, four new skins, furniture, and additional rewards.

Following the plot of Episode 7, Rhodes Island operations in Chernobog resume. While Amiya and Rosmontis proceed to go straight to Talulah’s base, the war is about to begin. Earlier, players discovered the shift in Talulah’s personality following her journey to the village. In this episode, players can explore the reasons behind Talulah’s transformation into a Tyrant and understand her unique charm. During the final level, Amiya’s new form will be unlocked. Stay tuned.

#QUIZ: How Much Do You Remember About The Original Digimon Adventure?

The time-limited Fan Appreciation Sign-In Event begins on April 30th and will last till May 14th. Players can obtain a [Memorial-Limited Headhunting Permit] and can also sign in for ten days to earn multiple rewards including Originite Prime, LMD, Ethan’s outfit, etc., and they will have additional opportunities to get emergency sanity samples and material supplies from the stages.

There are 4 new Operators. Rosmontis, Mudrock, Whisperain and Jackie. All of them possess distinctive personalities.

6-star Operator: Rosmontis, mastering the Originium Arts, is an elite operator of Rhodes Island. She feels hatred towards the Reunion and its commander Talulah as they took down her family, as a result she is determined to destroy the organization. As a wide-range AoE Sniper, Rosmontis specializes in anti-ground abilities. Her attacks deal physical splash damage twice to ground enemies and ignore the targets’ defense.

6-star Operator: Mudrock previously made an appearance in Twilight of Wolumonde and Rewinding Breeze, so she’s no stranger to long-time Arknights players. As a Sarkaz mercenary who formerly fought for Reunion, she has surprisingly decided to join Rhodes Island as a collaborator. Mudrock serves as a brand-new enmity Defender with high DPS. Her traits grant her one stack of shield meter at set intervals, which can block damage and restore Mudrock’s HP.

5-star Operator: Whisperain is a new wide-range Medic of Rhodes Island. She can heal as well as grant resistance status to her allies deployed within her attack range to recover a certain amount of  HP per second.

4-star Operator: Jackie is a new brawler-type Guard, whose talent enables her to obtain a specific physical dodge, which also increases her attack speed after a successful dodge attempt.

In addition to Ethan’s event rewarded outfit, there will be a batch of new outfits for W, Texas, and Dobermann appearing in the store. A brand new furniture set, Golden Game Room, will also be available to purchase. Also note that White Horizons will be the new lucky drop furniture set. Don’t forget to exchange if you want to collect the whole set! Many event packs will also be on sale and the event headhunting pack will grant players the permission to pick one six-star Operator from the pack’s list.

Founded in 2014 and publisher of Azur Lane and Arknights, Yostar Games specializes in game development, global distribution, investment, and video game IP management. Situated in Tokyo and Shanghai, Yostar Games has rapidly become the top publisher and developer of the anime genre in China and is striving to become a global leader in the gaming industry.

#How Is Bill Whitaker Doing as 'Jeopardy!' Guest Host? (POLL) #Are the new vaccines safe? #Kim Kardashian Just Found The PERFECT Way To End All This ‘Elf On The Shelf’ Madness!